China denied Sunday accusations that two of its diplomats are involved in illegal ivory trafficking in Africa, after the President of Uganda ordered an investigation into the pair. 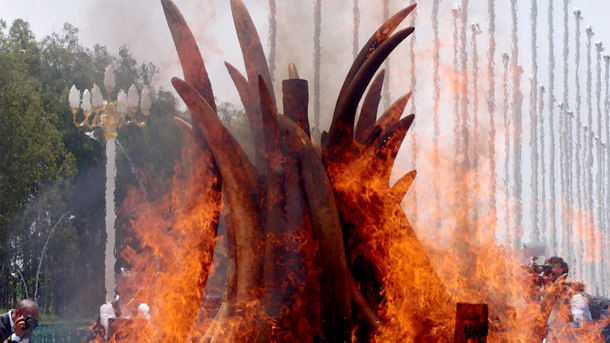 Destruction of ivory is used to deter poachers (Photo: International Fund for Animal Welfare Animal Rescue Blog CC BY 2.0)In a May 2 letter obtained Thursday by Anadolu Agency, President Yoweri Museveni asked the Inspector General of Government Irene Mulyagonga to investigate what he called "wrongdoings in the Uganda Wildlife Authority".

In November 2014, around 1.3 tonnes of seized ivory vanished from government strong rooms, the BBC reported.

Police initially arrested five senior wildlife authority officials and raised questions about why the seized ivory, which was worth more than US$ one million, was being stockpiled rather than destroyed as it should have been, according to the BBC.

In a press release Sunday, the Chinese embassy denied that any of their staff had been linked to the stolen cache of ivory, and reiterated its commitment to cracking down on illegal wildlife trade, according to New Vision.

Museveni’s letter added that, along with the Chinese embassy officials, the Wildlife Authority’s executive director Andrew Segguya is potentially implicated.

Ivory is a status symbol in China and sells for around US$ 1,100 per kilo. More than 35,000 elephants are killed across Africa each year for their tusks.

In December, China announced it would ban all ivory trading and processing by the end of 2017.

According to Museveni, however, the Wildlife Authority had also issued licenses to some Chinese officials for exporting pangolin meat and scales, the Observer reported.

Pangolin scale trade is banned under U.N. convention, but more than a million pangolins are estimated to have been smuggled over the past decade around the world.

The illegal trade in ivory and pangolins are among eight issues the president asked authorities to investigate. The Wildlife Authority is also suspected of extravagant travel expenses, soliciting bribes from banks and murders committed in the country’s national parks.

Since the president’s letter was published, the Chinese Embassy has repeatedly denied any of its staff’s involvement in illegal wildlife trade.

"All the accusations […] are totally groundless and based on wrong findings," Chinese Ambassador Zheng Zhu Qiang told Anadolu Agency. "We do not have, and have never had, the two names in our embassy."