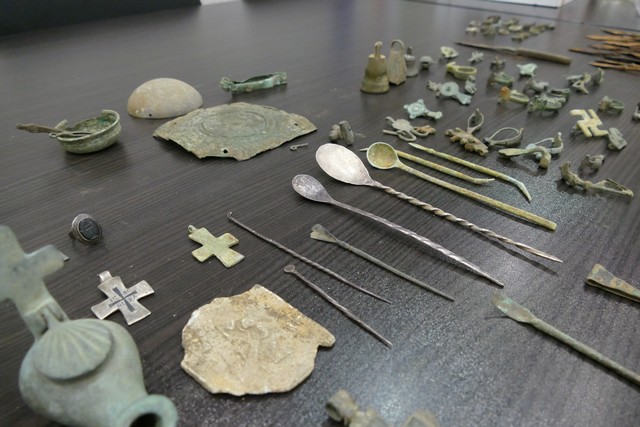 Some of the seized artifacts (Photo: MRV)According to Focus News, the arrested are accused of organized crime, supporting transnational trafficking channels and of trading artifacts of cultural and historical value, acquired primarily through the looting of Bulgarian and Turkish archaeological sites and reserves.

"We’ve been investigating this case for about a year and a half," said Sotyan Temelakiev, the deputy director of the Bulgarian Ministry of Interior’s organized crime department CDCOC, BGNES reported.

"The channel goes from Turkey, Bulgaria, through Serbia and onto Western European countries, mainly France, Britain and Germany," Temelakiev said.

Alongside the arrests, authorities seized over 5,600 objects of cultural and historical value, including coins from the time of antiquity, ceramic and metal containers, rings and earrings – some made from gold and silver.

The probe reportedly began in 2016 as a joint investigation between Bulgaria and France, but later sought the assistance of Turkish authorities and the Belgrade-based Southeast European Law Enforcement Centre (SELEC).

The string of raids and arrests began on May 4 when authorities in Paris arrested three Frenchmen during the sale of a trafficked antique, according to Yavor Kolev, the head of CDCOC, Blitz reported.

The second stage of the operation took place on May 12 with the search and seizure of the treasure hunters’ properties in Bulgaria and Turkey.

"Today, we launched the third stage in eight cities in Southeastern and Northeastern Bulgaria," said Kolev. "We searched 30 addresses, and [initially] detained 29 persons."

Among those now awaiting trial are Bulgarian nationals, a Serb with a French passport and other foreign nationals, according to news.bg.

Kolev said that investigations were ongoing and that he expects they will spread over more European countries.

"Bulgaria and Turkey are known for their rich historical heritage and have become a privileged target for traffickers," said French liaison officer Eric Delvil, BGNES reported.