Afghanistan, the world’s greatest producer of opium, is projected to reap an even greater harvest this year from areas where it was previously not grown, fueling concerns that increased profits from trafficking the crop will further empower the Taliban militancy, Voice of America reported Tuesday. 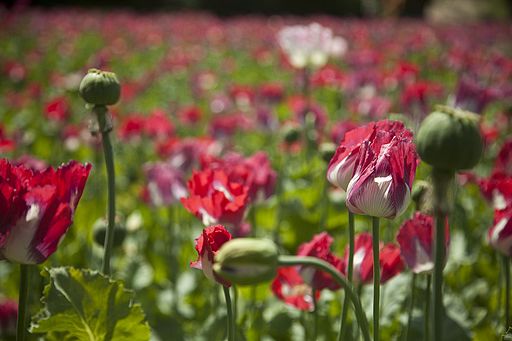 Poppy field (Photo: Sgt Pete Thibodeau)Afghan authorities said poppies, which traditionally have been grown in southern provinces, are now being cultivated in several northern and northeastern provinces, and that large-scale increases are also expected in provinces with previously little opium crops, such as northwestern Badghis and Ghor.

Weak government security and immediate economic benefits for farmers are noted as the major reasons for the rise in poppy cultivation.

This raises concerns that violence will escalate between Afghan government troops and the Taliban, who rely on narcotics to finance over 50% of their insurgency. It is also feared that increased opium will intensify corruption and organized crime in Afghanistan, a country already ranked among the worst in the world at Transparency International’s Corruption Perception Index.

"A satanic triangle of smugglers, terrorists and corrupt government officials is involved in drug production and trafficking," he said.

Since 2002, the U.S. has spent more than US$8.5 billion on counternarcotics in Afghanistan. The Afghan government says that with the help of agencies, it has been trying to help Afghans find a sustainable alternative crop source. But experts believe that the increase is partly due to weak oversight by the government.

"The government lacks political will to fight opium production," Abul Aziz, a Kabul-based counternarcotics expert, told Voice of America. "For the last 16 years, the government has done little to rid the country of narcotics and provide alternatives to farmers."