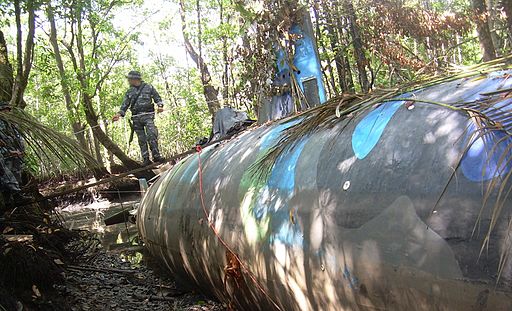 Narco submarine seized in Ecuador (Photo: US Drug Enforcement Administration)Police confiscated the drugs between May 4 and May 7 along Ecuador’s Pacific coast. The shipments were reportedly headed to the United States and Europe.

Once considered one of the safest countries in the region, discoveries of multi-ton shipments of cocaine are now common in Ecuador, and total drug seizures have increased year by year.

InSight Crime explains that several factors could account for this trend including a boom in coca production in neighbouring Colombia and Peru.

In addition, the demobilization of the Revolutionary Armed Forces of Colombia (FARC) has likely led criminal groups to take control of crop-growing territories abandoned by the guerrillas.

Organized crime groups such as Rastrojos and Urabenos in Colombia and the Mexican Sinaloa cartel have traditionally controlled large-scale drug trafficking in the country.

However, Ecuador has also seen the emergence of powerful homegrown drug trafficking organizations such as Washington Prado Alava, whose nameless syndicate moved 250 metric tons of Colombian cocaine in a span of two years.

Prado, dubbed the “Pablo Escobar” of Ecuador was captured by Colombian police in April.