Eight more people were charged Tuesday for their role in the embezzlement and money laundering of 17,528 million pesos (US$ 26 million) from Chile’s state police force, the Carabiniers, which brings the total number of those accused in the scandal to 43. 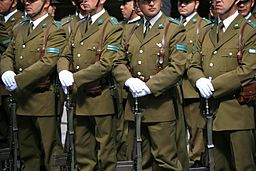 Carabineros de Chile (Photo: Alex Proimos CC BY 2.0)The scheme involved diverting money from the institution’s current accounts into the personal accounts of its officers, according to Terra.

Civilian professionals in charge of financial controls and external auditing were also involved in facilitating the fraud, according to Sputnik.

One of the eight is former Carabiniers chief accountant Raúl Albayay, who in early 2015 was given 70 million pesos (US$ 103,000) by another of the defendants.

Albayay later attempted to return the money to the Carabiniers’ account "in order to stop the criminal prosecution", according to Terra.

All eight have been placed under house arrest, with a travel ban and prohibited from approaching the other accused.

Bruno Villalobos, general director of the Carabiniers, told the investigating committee Monday that he would not be resigning from his position as he bears no responsibility for the fraud, according to Radio Cooperativa.

Retired lieutenant colonel Patricio Morales, however, who is currently in pre-trial detention, said that Villalobos had been fully aware of the fraud but decided not to reveal it, according to Terra.

"He is now diverting the focus, dissociating himself from the problem and obviously taking advantage of his entire network of contacts," he said.

On May 30, a further 12 people will face charges in the corruption scandal, which could bring the total number of those involed to 56, Radio Bio Bio reported.