Hungary indicted on Thursday 11 suspected people-smugglers for the death of 71 refugees whose bodies were found two years ago in a truck in Austria during the peak of Europe’s migration crisis. 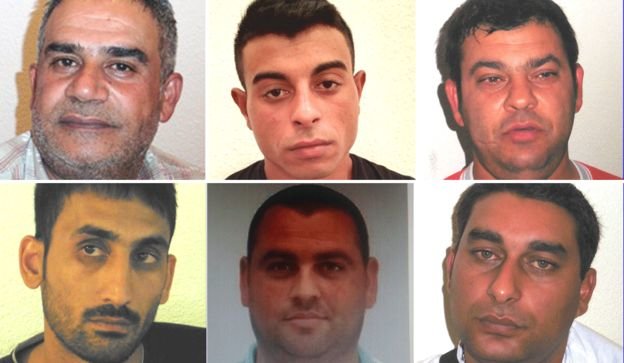 Six of the indicted (Photo: Austrian Police)Between February and August 2015, prosecutors say the smuggling ring moved more than 1,200 people into Western Europe. From June, they were transporting immigrants to Germany and Austria on a daily basis.

The alleged ringleader of the group was a 30-year-old Afghan man, who funded and orchestrated the operation. He is believed to have personally profited at least €300,000 (US$ 328,000) from the venture.

The eight other men worked as drivers and "forerunners," who would accompany the trucks in separate vehicles.

Prosecutors said in a statement that people were "often carried in closed, dark and airless vans unsuitable for passenger transport, in crowded, inhuman, excruciating conditions."

At around 5 a.m. on August 26, 2015, close to the Hungarian-Serbian border, the criminal group allegedly locked 71 migrants in a dark and unventilated refrigerator lorry emblazoned with pictures of sausages and a chicken. The doors of the truck could only be opened from the outside.

The BBC identified the driver as Mitko, a 29-year-old Bulgarian living in Hungary. He allegedly did not understand how to keep the doors only partially shut in a way that would still allow air to come in.

After half an hour, both Mitko and the forerunner heard the refugees banging and crying that they were running out of oxygen. Through their Bulgarian boss they reported the problem to the Afghan ringleader, who ordered them not to open the door, to ignore the pleas and to reach Western Europe as soon as possible.

The two men chose to comply and after three hours abandoned the truck beside a highway in Austria. Police believe the victims must have suffocated within an hour, the BBC reported.

The victims came from Iraq, Syria and Afghanistan, and included four children, one of whom was less than a year old. Two of the Iraqis had fought against ISIS before fleeing the country, according to the BBC.

Despite the tragedy, the smuggling ring loaded another 67 refugees the next day into the same conditions. This time, however, the refugees were able to kick the door of the load area open and survived.

In one instance, almost 100 immigrants were squeezed into the load area of a single truck.

All 11 suspects are charged with human smuggling as part of an organized crime group, as well as the torture of smuggled persons. The four men who participated in the fatal journey are charged with murder.