China Publishes the Foreign Addresses of its "Most Wanted" Fugitives

Chinese anti-corruption authorities published Thursday the foreign addresses for 22 of its "most wanted" suspects, who they believe to be living around the world in plain sight. 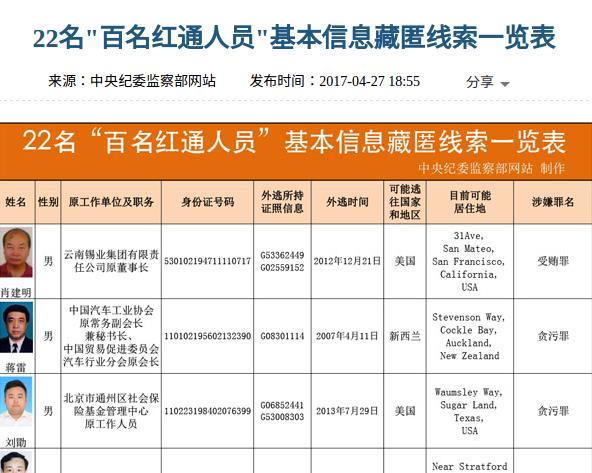 The Commission urged "specific countries not to pursue their own economic interests by issuing passports and visas through investment immigration schemes when applicants are suspected of corruption," according to China Daily.

"Passports and visas that have already been issued should be revoked as soon as possible," it said.

Ten of the suspects live across the US, five in Canada, four in Auckland, New Zealand, and one each in Sydney, London and the small Caribbean nation of St Kitts and Nevis.

None of the countries on the list have extradition agreements with China, Time reported.

Many Western countries have been reluctant to sign any such extradition agreements due to China’s poor human rights record and opaque criminal prosecution process, according to Reuters.

One of the alleged fugitives is Cheng Muyang, a major Vancouver real estate developer. The son of a disgraced corrupt governor, Cheng is accused of embezzling ¥5.35 million (US$ 640,000), according to the South China Morning Post.

The CCDI said the 22 suspects had "seriously damaged the hard-working integrity and law-abiding good image of overseas Chinese, undermined local security and stability, interfered with the normal lives of residents, and become a community stain," the South China Morning Post reported.

The commission says that 946 Chinese fugitives, the majority of whom are corrupt officials, are still at large in foreign countries.