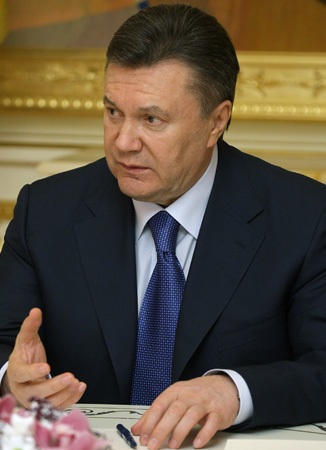 Yanukovych"This is money stolen from Ukrainian citizens and has been paid to Manafort for [his work] with our former corrupt president," Serhiy Leshchenko, the member of parliament who presented the invoice to the public, told Radio Free Europe.

"This corruption must be exposed," he demanded.

Leshchenko claimed that employees of an IT company in Kyiv discovered computer disks, debit cards and the invoice in a safe after renting office space Manafort vacated in 2014.

Manafort worked for almost a decade for Yanukovych’s pro-Russian Party of Regions.

The invoice bills Belize-based Neocom Systems Ltd for 501 computers and is printed on a letterhead from Manafort’s Virginia-based consultancy firm.

Leshchenko said at Tuesday’s press conference in Kyiv that he personally verified Manafort’s signature on the document.

According to Kyrgyzstan’s Central Bank, Neocom Systems is a shell company used by AsiaUniversalBank for money laundering and stock fraud.

After leaving Ukraine, Manafort became Trump’s election campaign chairman, but was forced to resign last August when his name was found on a secret handwritten register that showed who was paid how much by Yanukovich’s party.

The document called "the black ledger" showed that a slush fund of US$12.7 million had been set aside for Manafort’s services.

The latest accusation comes on the top of previous allegations against Manafort.

According to CNN, prosecutors in Kyiv have asked U.S. authorities seven times in the past two years to help them question Manafort in a corruption case against former justice minister Oleksandr Lavrynovych.

Despite an evidence-sharing agreement between the FBI and Ukraine’s General Prosecutor’s Office, U.S. authorities have not responded.

Help has also been sought in investigating Manafort’s connections to Yanukovych during the Euromaidan protests that erupted in 2013.

Texts messages hacked from the cellphone of Manafort’s daughter suggest that her father bore some responsibility for the deaths of protesters.

Andrea Manafort apparently texted her sister Jessica in 2015: "Don’t fool yourself. That money we have is blood money."

On Monday the FBI confirmed that they are investigating the ties of some Trump campaign members to Russian intelligence officials.

"Of all of the characters in and around the Trump campaign and administration, Paul Manafort’s relationships with Russians are by far the longest-standing and the deepest," Rep. Jim Himes told Politico. "And he has some pretty unsavory contacts."