Just in Case … Azerbaijan's President Appoints Wife as his Deputy

The President of Azerbaijan appointed his wife as his deputy on Tuesday, making her his successor in case he is unable to perform his duty, and this way cementing the power of his dynasty. 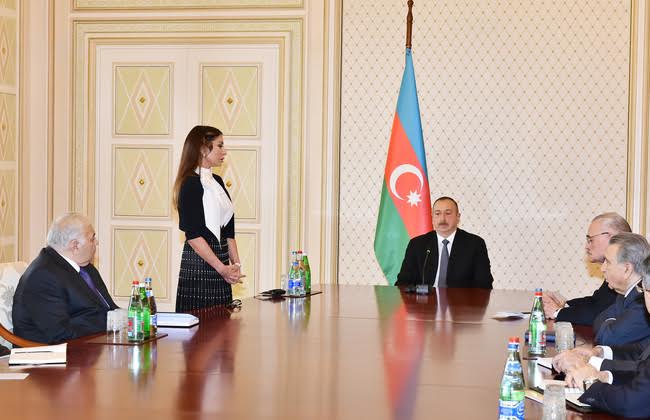 Azeri President Ilham Aliyev announces his wife as vice-president (Photo: president.az)Ilham Aliyev, 55, appointed Mehriban Aliyeva, 52, six months after a referendum allowed him to pass constitutional amendments that, among other things, introduced the post of a vice-president and gave the president wider powers.

The oil rich ex-Soviet country has been ruled by the Aliyevs for the past 24 years. Ilham Aliyev inherited power from his late father Heydar Aliyev in 2003.

Both father and son have been criticized for human rights abuses and corruption. The OCCRP named Ilham Aliyev Corruption's "Person Of The Year" in 2013 for "systematically grabbing shares of the most profitable businesses" in Azerbaijan for many years.

Mehriban married Aliyev when she was 19 and has served three times as lawmaker in addition to heading Azerbaijan's Heydar Aliyev Foundation and serving as deputy chairman of the ruling New Azerbaijan Party — which is also run by her husband.

Mehriban was born into the Pashayev family, which was described by a Wikileaks cable as "the single most powerful family in Azerbaijan." The Pashayevs have monopolized the country’s construction, insurance, banking and tourism businesses.

"Although there is a de facto dynasty in Azerbaijan, they made it now de jure," said Ali Karimli, the head of the opposition National Front Party, in a video posted on Facebook.

"Ilham Aliyev, who rules the country with authoritarian methods, doesn’t trust anyone else but his own family. With this decision he showed he is afraid of the people," he added.

Azerbajanis took to social media to ridicule the appointment. Among them was cartoonist Gunduz Agayev, who used the logo of a popular chewing gum brand "Love is..." and drew "Love is… to change the constitution for her."

However, Malahat Ibrahimgizi, a parliamentarian and top official of the New Azerbaijan Party, said the First Lady’s skills and abilities were known all over the world.

"She deserves it," Ibrahimgizi told OCCRP. "Her love for humanity, her loyalty to the nation qualify her for this top position," she explained.

Those who criticize the appointment are "blind people," unable to accept Mehriban’s success and serve the interests of foreign forces, she said.