Moroccan and Spanish authorities arrested 10 people suspected of having trafficked dozens of Nigerian women to Spain, forcing them to prostitute for as little as € 5 (US$ 5.3) under "conditions of absolute slavery," a police report said Tuesday. 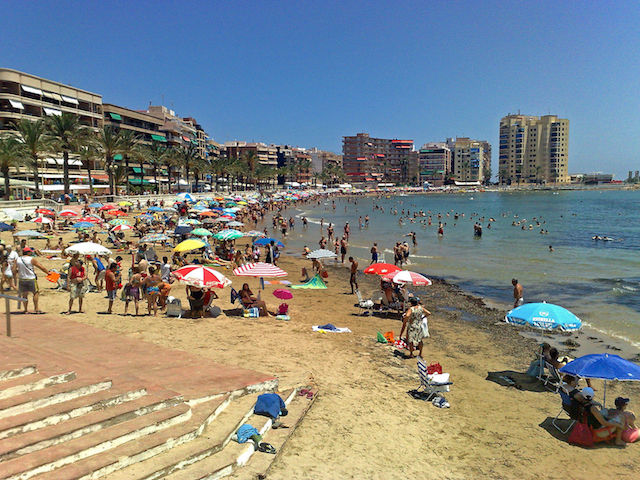 Torrevieja, Spain (Photo: Wikimedia Commons)The discovery of a 16-year-old victim in August 2015 led to the arrest of seven suspects in the Spanish town of Torrevieja, near Alicante, where police found evidence of sexual slavery involving at least 39 women, the Spanish police report said.

The traffickers allegedly fed the women only with bread and forced them to prostitute every day for more than 12 hours — from late afternoon until the early morning hours the next day.

The victims were "severely punished" if they came home before dawn and without the amount of money the traffickers demanded.

This and the sheer number of Nigerian prostitutes working in Torrevieja created competition that forced the women to offer sexual services for as little as € 5 (US$ 5.3). The victims were subjected to a a "rigid system of fines" that increased their debt with the organization.

"The degree of control exercised by the traffickers over the victims and the situation of fear in which they lived were reflected in their later statements, in which they came to assure the agents that 'there was no other option,'" the report said.

Police said further investigations led to the arrest of three other members of the organization based in Nigeria and Morocco who allegedly helped recruit the women and performed voodoo rituals on them before taking them to Spain by sea and land.

Police said one of the detainees was a prominent human trafficker who allegedly operated more than 40 migrant boats across the Strait of Gibraltar since 2008, some of which never reached Spain and may have been shipwrecked.

Another detainee, responsible for taking the victims from Nigeria to Morocco, allegedly leveraged his reputation and solid relations with several border authorities to smuggle the victims through various sub-Saharan countries.

"Lacking any kind of of scruple, he was characterized by mistreating the victims and sexually assaulting them throughout the transfers," the report said.