The head of Lithuania’s Tourist Department was forced to resign after investigative journalists revealed that some of the photos used in the department’s marketing campaign to promote Lithuanian tourism were actually taken in Norway, Finland and Slovakia. 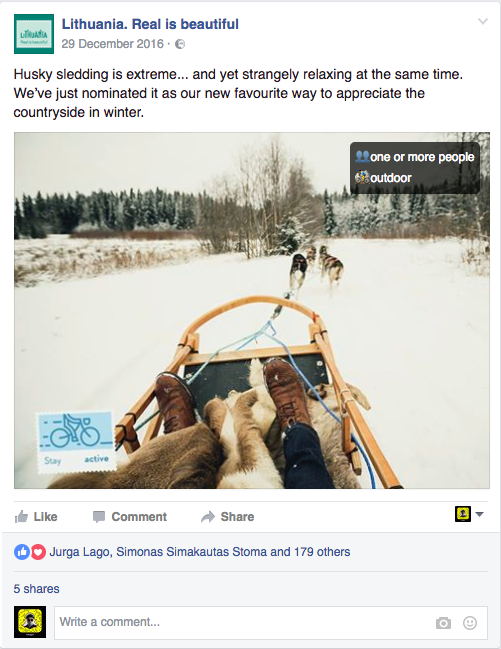 Screenshot of photo on the Lithuania Tourism Department Facebook page

Ironically, the fake photos were part of the Tourism Department’s social media campaign launched in 2016 and called "Real is Beautiful."

Minister of economy Mindaugas Sinkevicius summoned Jurgita Kazlauskiene on Friday after OCCRP’s partner 15min.lt revealed that some of the photos in the social media marketing campaign worth €140,000 (US$ 148,713) were showing the beauties of other countries.

For example, a picture supposedly portraying a frozen lake in Lithuania was actually taken in Oslo. A photo from Finland is promoting husky sledding.

After a short chat with Sinkevicius, Kazlauskiene announced her resignation.

On Thursday evening, when the story was released, Lithuanians bursted out with a wave of mockery, posting pictures of the Grand Canyon, the Eiffel Tower and other world-famous atractions as being located in Lithuania.

According to 15min.lt, two Lithuanian companies Open Agency and Turinio Rinkodara won the tender with their €139,682 (US$ 148,380) bid to launch the social media campaign. However, their competitor Socialus Marketingas soon noticed that the pictures used for advertising Lithuania don’t quite fit the description of 350 unique photos described in the technical requirements of the tender.

The competitor found that the photos were actually bought from Shutterstock and other rather inexpensive sources.

When confronted with the findings, the Tourism Department claimed it allowed the contractors to use stock photos, explaining that a total of 700 pictures was needed, and only half of those had to be unique. The department stated it did not object the use of "generalized" photos.

Contractor UAB Turinio Rinkodara additionally stated that the use of photos taken in other countries for promoting Lithuania was "not a problem."

"These particular photos are aimed at conveying emotion related to the winter entertainment, the location plays no role and it’s impossible to identify if it’s Lithuania, Latvia or Slovakia," Kamile Jonikaite, the CEO of Turinio Rinkodara, told 15min.

However, Prime Minister Saulius Skvernelis made his stand on the issue clear when he joined those mocking the "Real is Beautiful" campaign. He posted a photo of the headquarters of the European Commission in Brussels as the new building of the Lithuanian government.