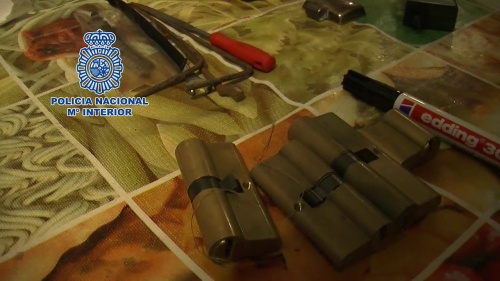 Burglary tools seized by Spanish police during the investigation (Photo: Policia Nacional)The operation was carried out over the span of several months with the help of Europol, and the French and Georgian police, Spanish police said.

The criminal organization comprised nine cells operating in Madrid, with links to the Spanish cities of Malaga, Seville, Sabadell, Barcelona, Alicante and Bilbao, according to the release.

Most of the arrested were Georgian nationals, along with eight Spanish citizens, Sputnik News reported.

An increase of house burglaries forced the Spanish authorities in early 2016 to open an investigation, which resulted in operation "Aikon I," when nearly 50 suspects were arrested.

However, the illicit activity continued, prompting police to launch operation "Aikon II", when more arrests were made. Police also searched 26 houses, seized cash, vehicles, tobacco, jewelry as well as picks and false keys used for burglaries, according to the report.