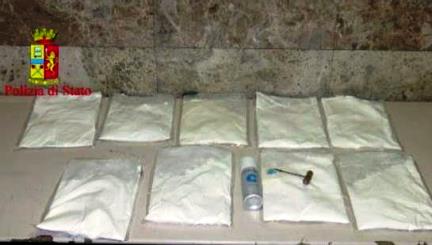 Cocaine seized during the investigation (Photo: Polizia di Stato)The suspects are believed to be linked to the ‘Ndrangheta crime group’s Morabito-Bruzzaniti-Palamara clan, based in Italy’s southern Reggio Calabria region, which allegedly smuggles large quantities of cocaine from South America to Italy. Italian police have also issued a warrant for one Colombian suspect, Carlos Eulogio Esquivel Lozada, believed to be an intermediary between the Italians and their Colombian counterparts. Lozada is still presumed to be at large in Colombia.

The group allegedly used checked luggage to smuggle cocaine via planes, 20 kilograms at a time. The traffickers would leave from Peru, Colombia or Santo Domingo to Bologna via Madrid. A private security guard at the Bologna airport, bribed by the ring, would allow the luggage to pass through customs unchecked.

Italian police received a tip shedding light on the trafficking operation in 2011 from the Colombian paramilitary organization Atte Aguilas Negra – Bloque Capital. The group notified police that several Italian citizens had been included on its list of military targets for collaborating with a rival Colombian paramilitary group, the Revolutionary Armed Forces of Colombia (FARC), to traffic drugs.

The 2011 email listed the names of several Italians from the Reggio Calabria region as well as their Colombian counterparts, according to investigators.