Spanish police announced Monday the arrest of 30 people involved in a transnational group that sold refitted guns from Eastern Europe over the Internet. 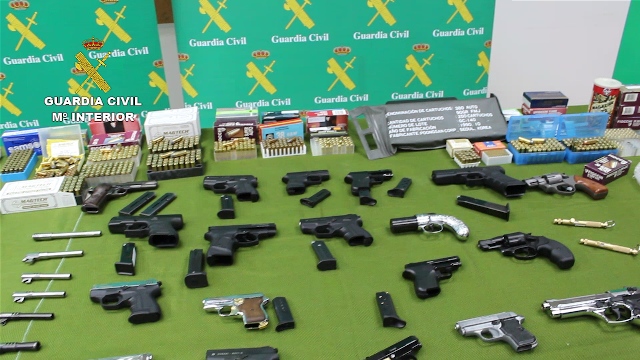 Some of the seized weapons (Photo: guardiacivil.es)The arrests come as part of an operation, coordinated by Europol, that saw police shut down two illegal workshops involved in modifying weapons and making ammunition. Police seized 124 firearms, mostly handguns, and more than 14,000 rounds of ammunition.

The investigation started in April with the arrest of a suspect in the province of Albacete in central Spain who is accused of modifying Eastern European weapons in his garage. Officers seized 23 pistols and 450 rounds of ammunition and found documents which led to other alleged members of the group.

Further raids across the country led to the uncovering of gun modifying workshops in several provinces, as well as an indoor marijuana plantation comprising more than 250 plants in Barcelona province.