Macedonia’s Special Prosecutor’s Office announced Friday it is investigating 10 current and former members of the Balkan country’s secret service for taking part in the illegal wiretapping of nearly 6,000 citizens between 2008 and 2015. 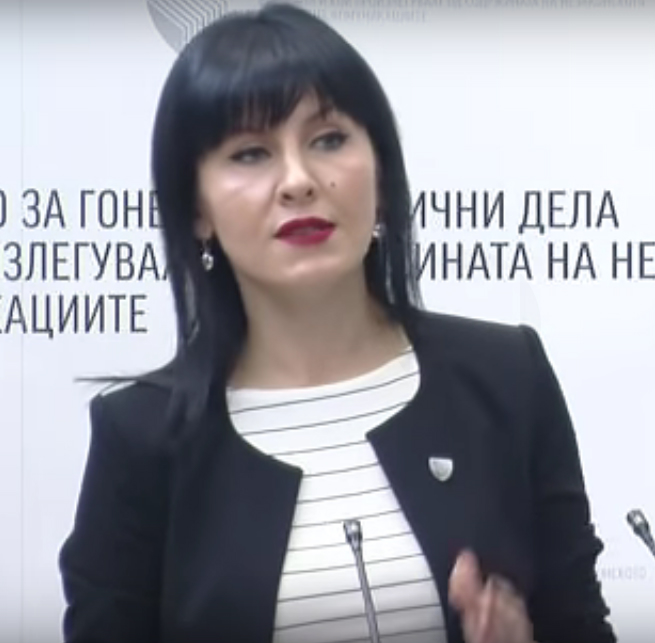 Fatime Fetai, speaking at press conference (Photo: Nova TV)Fatime Fetai, the deputy head of the office, said the officials from the Administration for Security and Counterintelligence (UBK) were under investigation for carrying out the wiretaps without court orders, thereby breaching “fundamental rights and freedoms of citizens.”

Between 2008 and 2015, the Macedonian secret service allegedly intercepted the communications of at least 4,286 people without court orders ever being issued, OCCRP partner Nova TV reported. Another 1,541 citizens' communication devices were monitored, with court orders only being issued later.

The investigation is based on data obtained by prosecutors from only one of three telecommunications operators whose users were monitored. Prosecutors are yet to acquire data from the other two operators.

“There is nothing new in today's press conference, other than an official confirmation that our lives were not monitored by any foreign services, but by those we paid with out money to protect our privacy,” Jovanovski said.

Cvetkovska said: “It is interesting that our phones were tapped right in period when we started investigating with OCCRP the assets in Prague of Saso Mijalkov, the director of the secret service.”

The release last year by opposition leader Zoran Zaev of roughly 20,000 wiretaps of Macedonians allegedly ordered by then Prime Minister Nikola Gruevski has prompted a wide-ranging probe by the special prosecutor of allegations of corruption and abuse of power.

The Special Prosecutor has so far opened up a number of investigations into alleged wrongdoing by Gruevski, Mijalkov, Jankuloska and other members of Gruevski's cabinet and other government officials. The cases concern possible election fraud, embezzlement and misspending, corruption even torture. The office filed its first two indictments in September.