OCCRP’s Miranda Patrucic accepted the 2016 Knight International Journalism Award on Monday for reporting that, along with OCCRP journalism partners, has exposed corruption across Europe and Central Asia. 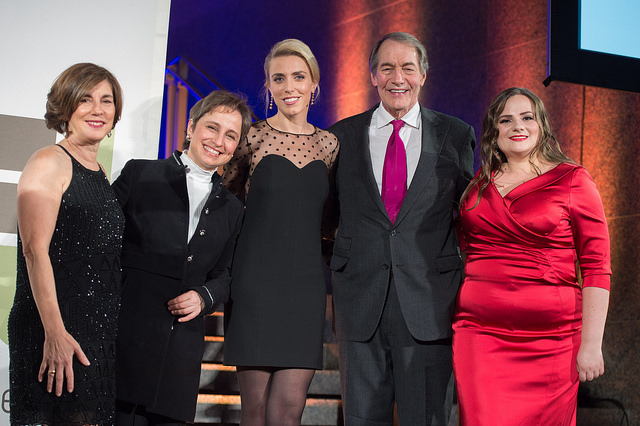 Miranda Patrucic, right, at the awards dinner in Washington, DC (Photo: Alexander Morozov)
Patrucic, regional editor for OCCRP, accepted the award from the International Center for Journalists at a gala in Washington, DC by thanking OCCRP’s network of investigative reporters, many of whom face serious threats to their safety and freedom.

"Today, as I stand here in front of you – some of the most respected journalists in the world – I couldn’t be more humbled and proud," Patrucic said in her speech.

"But my being here is a testament to the many reporters, researchers and editors in dozens of countries who make cross border investigative reporting possible. It is a craft that requires many to contribute their skills, their heart and their soul at the risk of their happiness, freedom and even life," she said.

"I am here but there are many more who must remain invisible because they and their family members face arrest."

Patrucic joined the Center for Investigative Reporting in Sarajevo in 2005, eventually moving across to OCCRP, where she has worked on stories and mentored journalists in nearly two dozen countries.

Along with investigative journalists around the world, Patrucic was part of the massive Panama Papers project reporting on leaks from the law firm Mossack Fonseca. Working alongside OCCRP partners, she helped to expose an offshore network that hid the massive wealth of the family of Azerbaijani President Ilham Aliyev.

Among Patrucic's achievements has been the exposure of corruption in her native Bosnia and Herzogovina, as well as neighboring Montenegro. Her reporting in Uzbekistan helped reveal how the then-president's daughter, Gulnara Karimova, accepted more than US$ 1 billion in bribes from European telecom companies.

Also receiving the Knight International Journalism Award alongside Patrucic was the investigative team from Mexican news site Aristegui Noticias, who reported on abuses of power by the country’s elite despite living in one of the world’s most dangerous countries for members of the press.