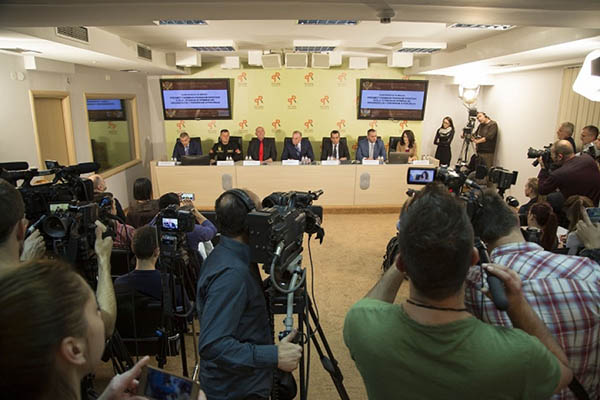 Footage from Special Prosecutor's press conference (Photo: tuzilastvocg.me)Chief Special Prosecutor Milivoje Katnic said Sunday that the aim of the plot was to assassinate Djukanovic, break into Parliament, and declare victory for a political “structure”, which Katnic did not name, over Djukanovic’s ruling Democratic Party of Socialists (DPS), which won the largest number of mandates.

The plot was allegedly hatched to counter Djukanovic's pro-Western leanings and to block the country’s path towards Euro-Atlantic integration, especially in regard to Montenegro's bid to join NATO, Katnic said.

Andrija Mandic, an official from the Democratic Front (DF) alliance of opposition political parties, told Montenegrin media that the prosecutor was falsely accusing the DF in the plot.

The DF is pro-Russian and has publicly opposed the DPS and Djukanovic's push towards NATO and European Union membership.

The DF claims the DPS staged the event so that, if it lost the election, it could declare a state of emergency and proclaim the results invalid. Furthermore, the plot was meant to justify bogus investigations of DF officials in the future, should the DPS win, says the DF.

Authorities arrested 20 Serbs and Montenegrins in relation to the alleged plot, freeing six of them after questioning. Among those arrested was Bratislav Dikic, a former commander of neighboring Serbia’s special police force, prompting allegations that the plot was organized by Serbian paramilitaries.

But the idea behind the plot, Katnic said, stemmed from individuals in Russia.

“Those who organized this criminal group are nationalists from Russia, who believed that the government in Montenegro, headed by Prime Minister Milo Djukanovic, cannot be changed through elections and [must] be overthrown violently,” Katnic said.

The plan, he elaborated, was for members of the organized criminal group to infiltrate citizens standing in front of the Montenegrin Parliament awaiting election results. Then, when certain politicians from the unnamed “political structure” took the stage, the insurrectionists were to break into the building and stay there for a minimum of 48 hours, said Katnic.

Katnic said the action was to have been coordinated by a politician from the unnamed political group, whom he also declined to identify.

He did say, however, that the Russian government was not involved in the action, which he said was organized by two nationalists from Russia.

Prosecutors also presented a short video of seized evidence in the case, including equipment used by the special police force such as handcuffs, iron batons, pepper spray, iron wire used for blocking roads, and knuckledusters.

Dikic, the former Serbian special police commander, accused Montenegrin police of framing him. He said a police officer gave him the items that were later seized by Montenegrin authorities during his arrest.