The family of an Italian organized crime accountant appears to have dodged the seizure of its British assets by moving them offshore to Malta, and is now using its new island base to run successful online gambling platforms, according to an investigation by journalists at Investigative Reporting Project Italy (IRPI), an OCCRP partner. 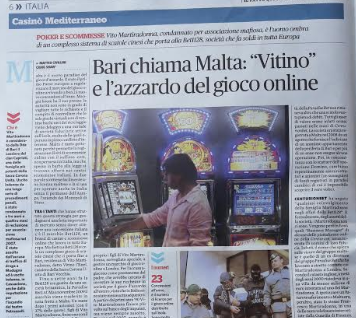 The original Italian article in Il Fatto QuotidianoIn a report published in Italian newspaper Il Fatto Quotidiano on Monday, IRPI journalists showed how the family of Vito Martiradonna, who was convicted of being affiliated with the Sacra Corona Unita organized crime group in 2007, successfully hid assets from law enforcement by taking advantage of Malta's lax online gambling regulations.

Reporters found how, as Italian police closed in during November 2009, the family managed to successfully move gambling company Bet1128 and other key assets from the United Kingdom to Malta – and out of reach of law enforcement. A month later, Martiradonna and his two sons Michele and Francesco were arrested on fraudulent transfer charges, for which they were later acquitted in 2012.

The November sale saw British company Paradise Bet Ltd. sell Bet1128 and 11 other assets to Malta-based CenturionBet for 10 million pounds (US$ 12.29 million) – a figure that does not appear anywhere in Paradise Bet’s accounts. Michele Martiradonna was the primary shareholder of the Britain-based Paradise Bet from 2005 until his arrest in December 2009.

The sale left Paradise Bet with few assets to seize when the police finally moved in that December.

The sale appeared to have taken advantage of lax oversight of online gambling in Malta. The country was the first in Europe to enact comprehensive regulations on online gambling in 2004, which eased the entry process into the otherwise heavily restricted industry. The state soon found itself overwhelmed with license requests, leading it to hand private organizations headed by lawyersthe authority to issue permits.

While the Martiradonna family denies any connection to the Maltese company, IRPI uncovered evidence that suggests otherwise. Family members are not listed as owners or directors of the company, but Martiradonna’s two sons list themselves on networking website LinkedIn as managers of several gambling operators that, according Malta’s business registry, operate from the same address as CenturionBet.

Throughout its existence, CenturionBet’s ownership has shifted from one British Virgin Islands company to another, with the stated beneficial owner listed as Antonio Buontempo, a former Paradise Bet employee and a director of a company that shared an address with Paradise Bet. In the mid-2000s, Buontempo’s was listed in public British registries as residing in a 500,000 pound (US$ 614,970) London property registered to Michele Martiradonna.

In phone conversations intercepted by police in the period before the November 2009 sale, Francesco Martiradonna repeatedly discussed moving Paradise Bet’s assets to Malta and once suggested using nominee directors to do this, according to Italian arrest warrants obtained by IRPI.

In a response to IRPI, Martiradonna family lawyer Giancarlo Chiarello denied that Vito Martiradonna’s children had anything to do with the Maltese company.

“The company CenturionBet has never been the subject of a criminal investigation,” Chiarello said. “And I am not aware that Francesco Martiradonna played a role in its corporate structure.”

Francesco Martiradonna told IRPI journalists that he had no connection to the Maltese company. He did, however, say that prior to the arrests “there were discussions over a possible move to Malta, but purely for commercial reasons.”