A Russian court on Wednesday sentenced a man who swindled a politician out of more than US$ 6 million by convincing him to invest in a fictitious Kremlin-managed investment fund, local media reported. 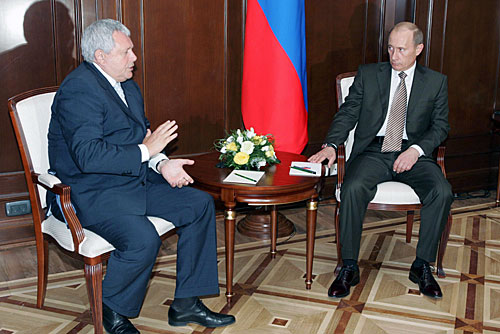 Konstantin Titov and Russian President Vladimir Putin in 2007 (Photo: Kremlin.ru CC BY 4.0)Moscow’s Nikulinsky District Court sentenced Vladislav Tsoraev to 12 years in prison after he was found guilty of conning Konstantin Titov, a former governor and senator in the southwestern region of Samara Oblast.

Tsoraev introduced himself in 2007 to Titov as the head of Center, an investment fund that he said was organized by Russia’s presidential administration. Tsoraev promised a 100 percent return, via investments in blue chip stocks, if Titov put in at least $500,000.

Titov forked over an initial $4.4 million, followed by an additional €1.5 million (US$ 1.68 million) loaned by his son Alexei Titov, a former owner of Samara’s Solidarnost bank.

But much like Center itself, the returns on the investment turned out to be non-existent. After several months, Titov got cold feet and demanded his money back.

This never happened. Tsoraev was sentenced to nine years in prison in 2009 in a separate fraud case.

In December 2015, Titov filed a complaint with law enforcement alleging the theft of US$ 6 million.