Spanish police arrested Friday five men suspected of being members of the infamous Pink Panthers gang, after a lightning robbery that saw them allegedly steal €400,000 (US $443,620) worth of jewelery in under a minute. 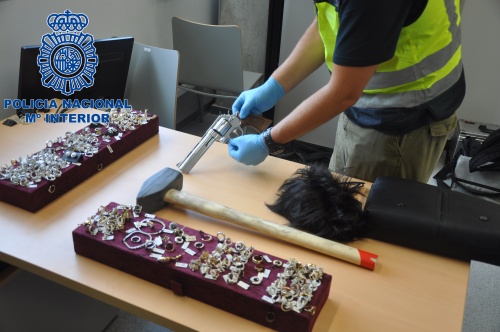 Spanish police show loot and implements from the heist. (Photo: Policia Nacional)The arrests are another setback for the group hailing from the former Yugoslavia. The Pink Panthers have attained legendary status – and have been labeled by some the best jewel thieves in the world – thanks to a reputation for daring, swift and highly organized heists.

The five suspects, who police said were Serbian, were arrested after two of them entered a jeweler on a busy street in Barcelona, one brandishing a handgun, smashed the display case, and made off with the loot in 48 seconds.

Unbeknown to the robbers, police were watching, having been tipped off by German authorities several days before that a suspected Serbian Panther had entered the country. With surveillance in place, Spanish police were able to identify other members of the gang and lie in wait for the sting.

The foiled robbery mirrored the typical modus operandi of the Pink Panthers, a group whose methods have often seemed more typical of Hollywood than real life. Gang members have used disguises, such as dressing up as women, and have even organized prison breaks to free members.

In June last year, the International Police Organization (Interpol) gathered nearly 60 specialists from 22 countries to attend a two-day meeting and discuss ways to stop the gang. Officials at the time said the gang had since 1999 stolen jewelery worth about €334 million from 380 robberies in 35 countries.

In 2004, the Pink Panthers were behind the biggest jewelery theft in Japanese history, stealing about US$ 30 million of jewelry from a shop in Tokyo. One diamond necklace they stole was reportedly worth US$ 25 million alone.