Spain's National Court sentenced 11 company executives to prison on Wednesday over a pyramid scheme that saw nearly 200,000 people cheated out of billions of dollars. 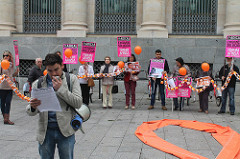 A May protest including victims of Afinsa  (Photo: ADICAE / CC BY 2.0)The executives of Afinsa Bienes Tangibles S.A. were ordered to pay € 2.57 billion euros (US$ 2.86 billion) in compensation for the scheme, which was shut down by police in 2006.

The court found the company had defrauded 190,022 small investors by promising them higher than market returns for the purchase of stamps, which the company pledged to then resell on the market. Instead, 150 million of the overpriced stamps accumulated in the company’s warehouses, while investors were encouraged to bring new people in on the scam.