Threats to OCCRP Partner KRIK: "You Should be Lined up and Shot"

Threats against independent journalists are fairly common in Serbia. But a recent barrage of online harassment against OCCRP partner the Crime and Corruption Reporting Network (KRIK) – including death threats – raises serious concerns about the freedom of the press in the country. 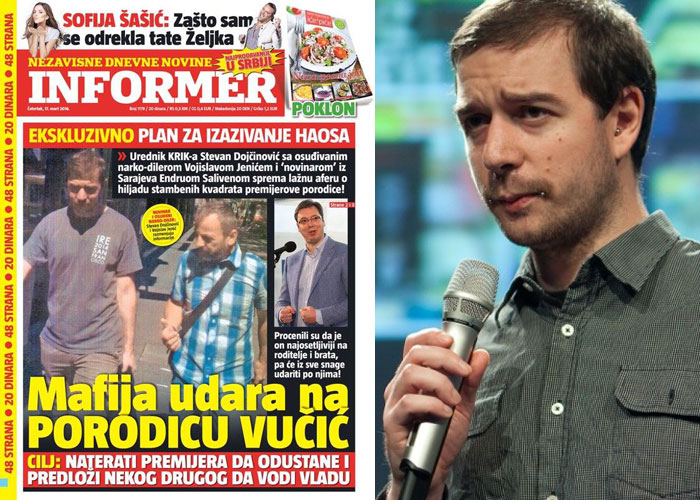 The online abuse comes on the heels of a campaign by pro-government media and some officials labeling KRIK a tool of foreign espionage. KRIK has filed a criminal complaint to Serbia's High Court over threats sent to its editorial office and journalist Dragana Peco.

In a recent message to KRIK journalists, one anonymous Twitter account said: "who do you think you are, researching the work experience of the president of the state and the government" before offering a string of violent obscenities. Yet another account said KRIK journalists "should be lined up and shot as foreign agents in Serbia."

KRIK journalists managed to establish the identity of one of the individuals believed to be behind the threats, and forwarded their information to prosecutors. Another account, whose identity is unknown, hides behind the screen name "Petar Pan.”

Following these stories, the tabloid Informer, a publication close to Prime Minister Aleksandar Vucic, spearheaded a sustained media campaign against chief editor Stevan Dojcinovic, citing information that appeared to come from government surveillance. Other government-friendly media joined in a torrent of abuse labeling Dojcinovic a "mafioso," a "spy," a "media terrorist," a "sado-masochist" and an "evil person."

The chief editor of the newspaper Pecat, Milorad Vucelic, has labeled Dojcinovic a "foreign occupier mercenary" bent on provoking war in the Balkans.

Apart from the tabloids, some government representatives have also publicly targeted KRIK journalists and labeled them spies. A lawmaker from Vucic’s Serbian Progressive Party, Vladimir Djukanovic, labeled Dojcinovic "a Soros agent." Djukanovic was referring to businessman George Soros, whose Open Society Foundations is one of several funders of KRIK.

University of Belgrade political scientist Rade Veljanovski told KRIK the media campaign by the current government resembles the model used by former strongman Slobodan Milosevic, whose governing coalition included Vucic's party at the time. Milosevic’s warmongering propaganda during the 1990s was done by pro-government outlets that attacked critical media. That 1990s campaign led to the deaths of two journalists, one of whom was similarly slandered as a spy before being murdered. Three government secret service agents were indicted in the case.

"For citizens, any investigative journalism which reveals irregularities in the work of the government and power centres is then experienced as an attack on themselves, and so they believe it's then totally fine to target journalists," Veljanovski said. Journalists conducting investigative reporting in this situation have no choice but to stay accountable and courageous, he added.

In addition to KRIK, other independent journalists in Serbia have faced threats. Slobodan Georgiev, a journalist for OCCRP partner the Balkan Investigative Reporting Network (BIRN) recently received death threats on Twitter, which were reported to prosecutors and the office of Vucic.

A man who repeatedly threatened B92 television editor Veran Matic and Insajder journalists, as well as their editor Brankica Stankovic, was arrested in March this year. Zoran Kesic of the 24 Minutes TV program and a number of other journalists were also recently threatened.

“We hold the government of Aleksandar Vucic responsible for the safety of our journalists. They are creating an environment of fear and hatred directed at us for their own political benefit. This is a crime and they need to stop it now,” said Drew Sullivan, editor of OCCRP.