Russia’s deputy premier has bought apartments in an iconic Stalinist tower worth as much as US$10 million via an intermediary, anti-corruption campaigner Alexei Navalny said on his blog Monday. 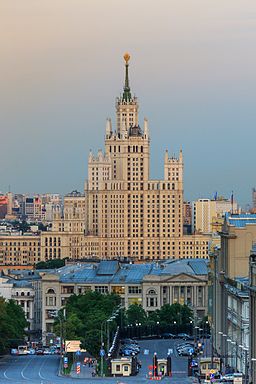 By A.Savin [FAL or CC BY-SA 3.0, via Wikimedia Commons]Lawyer Sergey Kotlyarenko purchased the ten apartments in the Kotelnicheskaya Embankment Building between 2014 and 2016 on behalf of First Deputy Prime Minister Igor Shuvalov, Navalny, the founder of the Anti-Corruption Foundation (FBK), said.

The apartments cover 719m² in the 14th floor in the lavish building near the centre of the Russian capital with a market value of about 600 million rubles (US$ 9,295,452).

Kotlyarenko, who owns KSP Capital Asset Management, confirmed to Russian portal Rambler News Service on Wednesday that he bought the apartments as part of an investment plan to buy out the entire floor and merge it into one large apartment. Kotlyarenko said that although he is the legal owner for the time being, Shuvalov’s family may obtain ownership “if we successfully finish everything, join (the apartments) together, and get the agreement of residents.”

Shuvalov’s office did not reply as of press time to a request from the OCCRP for comment. A unnamed spokesperson for the deputy premier’s office was quoted by newspaper Kommersant as saying Shuvalov’s family has already openly declared its assets.

Shuvalov recently came under criticism after he commented that it “seems funny” that Russians were buying 20m² apartments. The FBK has also said the deputy premier owns an array of luxury assets, including properties in the United Kingdom, Russia and Austria.