Russia’s Federation Council unanimously voted to reappoint Prosecutor General Yury Chaika for another five-year term, in the midst of corruption allegations involving his sons and linking his deputy prosecutor to an organized crime gang. 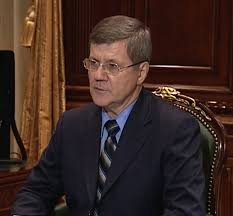 Russia's Prosecutor General Yury Chaika (Photo:Wikimedia)Last December, the Russian Anti-Corruption Foundation (FBK) and its founder Alexei Navalny released the documentary film Chaika, accusing Chaika's family of wrongdoing and linking his innermost circle with the Tsapok Russian gang, which was responsible for a 2010 massacre in the town of Kushchevskaya, in southern Russia.

According to the investigative film, Chaika's sons are using their father's connections to pursue their own business interests.

One of his sons, Igor, is owner of several businesses in Russia and was illegally awarded state tenders for construction and development projects, according to the film. His other son, Artyom, owns a luxurious villa in Greece and a house in Switzerland and co-owns a five-star hotel in Greece with Olga Lopatina, the former wife of Deputy Prosecutor General Gennady Lopatin. The film also links Lopatin and his ex-wife to the Tsapok gang.

Chaika said that the information in the documentary was false and unfounded, according to RIA Novosti.

After the film’s release, Lopatina sued Navalny for slander; meanwhile, Navalny filed a lawsuit against Chaika for defamation, but the suit was dismissed.

Dmitry Peskov, Vladimir Putin’s spokesman, said that the Russian government was not interested in dealing with the allegations since they were not related to Chaika himself, according to The Moscow Times.

In late May, Russian President Vladimir Putin submitted the candidacy of Chaika to the Federation Council for approval. He has defended Chaika, claiming that the allegations are unfounded. Putin is also interested in protecting his agenda on the fight against corruption, according to Ilia Shumanov, Deputy Director of Transparency International Russia.

“If Putin didn’t reappoint Chaika he would show that Navalny was right, regarding the anti-corruption investigation,” he said to OCCRP.

Chaika’s re-election was in dispute until the last day, but it was not because of the investigation of Navalny on Chaika’s family; rather, it was because of the length of time that Chaika has already served as the head of the Prosecutor’s Office – with the re-election he will be in the post for 15 years overall, a source close to FSB [Federal Security Service] told RBC newspaper.

Currently, there is no official investigation on the allegations made by FBK and according to Shumanov, Chaika’s reappointment constitutes more an ethical problem, than a criminal one.

According to Shumanov, in Russia there isn’t an article in the criminal code about illicit enrichment so Chaika’s sons are not required to disclose the sources of their wealth. In addition, expert Pavel Kudukin said that that the concept of "conflict of interest" is almost inexistent in the Russian anticorruption legislation and that the question of whether his sons used their father’s influence for their own purposes is difficult to prove, according to Vedomosti newspaper.

Valentina Matviyenko, Chairman of the Federation Council, on Wednesday, justified the Council’s decision, saying that Chaika has “proved himself as a professional, competent and demanding leader.”

Chaika has served as prosecutor general since 2006 and his current term expires on June 22.