Italy: Mob Believed to Use Flaming Cats To Start Forest Fires in Sicily

After a series of forest fires broke out last week, officials in Sicily say that people linked to the mob, or their collaborators, are attaching burning rags soaked in petrol onto cats, and using them to start fires, the Telegraph wrote. 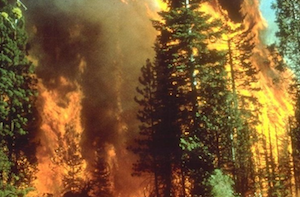 (Photo Credit: Wikipedia) The weaponized felines were discovered after authorities reviewed surveillance cameras, noticing a lack of human activity in the burned areas, and found a number of cat carcasses, the Daily Beast said.

Nebrodi regional park director Giuseppe Antoci said that the cats set fire to everything they touch as they run scared through the forest, adding that investigators have a harder time figuring out what caused the fires since the cats run wildly before burning up.

Antoci, whom the mafia recently tried to assassinate, said that “it is not possible that the whole of Sicily can go up in flames at the same time simply by chance,” according to the Telegraph.

Sicily employs more in the forestry sector that any other region in Europe, overall totaling around 23,000 people. Canada, which has vast extensions of public forest land, only employs 4,200 rangers, according to the Telegraph. Earlier this month 180 workers were fired after being convicted of mob-related crimes, or were under investigation for mob collusion.

The government has been working to cut the number of employees in the forestry job sector, and some believe that one goal of the fires is to try and prove that a high number of forestry staff is essential.

Another theory is that the mob has invested in development and reforestation firms, and plans to cash in on the recovery efforts from the fires. Much of the land that went up in flames is targeted for luxury villas, the Independent reported.

The Daily Mail said that in May, Antoci survived the first attempt by the mob to kill a public official in decades. His bodyguards defended him from bullets and Molotov cocktails after the Cosa Nostra crime group ambushed him.

The Italian Interior Ministry said overall, the flames resulted in damages of at least €30 million (US$ 34 million) as they burned around 14,000 acres, and destroyed houses, hotels and farms.

Sicily’s regional governor told the media that it was a an “attack on a government that fights the Mafia.”

The Cosa Nostra has seen its authority challenged by Nigerian gangs settling in the region amid waves of migration, and has suffered under a crackdown by the government in 2013 against some of their moneymaking schemes, which included renting out state-owned land to farmers and illicitly taking contributions from the European Union.

In retaliation, mobsters would burn the land and then move in to replant or develop, according to Antoci.