The third cabinet minister to step down under the administration of interim President Michel Temer had a secret Swiss bank account, according to evidence presented by Attorney General Rodrigo Janot to Brazil’s Supreme Court. 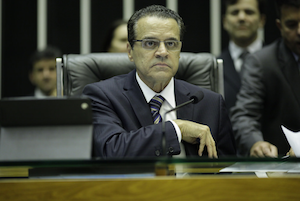 The reason for his resignation was not yet revealed by Temer’s office, but he was named along with several others in plea-bargain testimony by Sergio Machado that alleged that more than US$ 400,000 in bribes were sent to Alves’s campaign treasury from a Petrobras subsidiary. Temer was also accused of asking for US$ 400,000 to be sent to his party’s candidate for the 2012 election for the mayor of Sao Paulo, the Associated Press wrote.

The BBC reported that Machado, the former chief executive of a Petrobras subsidiary known as Transpetro, said that both men knew the money they asked for would come from an illegal kickback scheme that diverted billions of dollars from Petrobras.

Alves, who said he resigned to avoid embarrassing the government, joins former Minister of Transparency, Monitoring and Control Fabiano Silveira and former Planning Minister Romero Juca in leaving their jobs due to alleged connection to the Petrobras scandal.

Temer said that any graft allegations against him were dishonest and reckless, and said that a “foolish suggestion like that can confound the government’s work,” the Guardian reported. Allies of suspended President Dilma Rousseff have said that Temer’s allies have crusaded for her impeachment in order to hide their own corruption.

The resignation of Alves comes at a perilous time as preparations for the Summer Olympics continue to run into trouble. Rio de Janerio’s state governor recently authorized additional funding due to an economic crisis that could “even cause a total breakdown in public security, health education, mobility and environmental management.”  Brazil is suffering from its worst recession since the 1930s, but Temer and the International Olympic Committee President have said that preparations are on track for the opening ceremonies.

However, some transportation experts speculate that it will not be possible to test the subway line in Rio, the host city for the Games, before the opening ceremonies due to construction delays. The line is expected to transport hundreds of thousands of fans and athletes to venues. Other reports point out additional issues, including a highway inaugurated in June that already has cracks and potholes, according to IB Times UK.