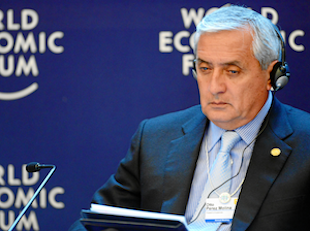 Otto Perez Molina (Photo Credit: Wikimedia) Both have denied the accusations, which include illegal financing, embezzlement and money laundering.

The duo is already jailed in connection with a corruption scheme that saw bribes being paid to officials in order to escape import taxes. Allegations emerged in April that they also accepted millions in bribes to let a Spanish port company win a contract.

Prosecutor Julio Barrios Prado said that Perez Molina shared money he got through seemingly legitimate shell companies with Baldetti, and both used the money for goods and services that included real estate, luxury vehicles and US$ 4.3 million in gifts.

Authorities also say that Baldetti bought clothes, jewels and travel with some of the alleged US$ 38 million in kickbacks received from at least 70 public works contracts between 2009 and 2015, AP reported. Baldetti allegedly spent more than US$ 27,000 of the illicit money on clothes during a trip to Miami.

The corruption charges come after United Nations-backed prosecutors likened the Perez Molina administration to an organized crime syndicate, writing in June that fancy birthday gifts, including a helicopter, beach house and powerboat, were bought to please the former president. The officials said the gifts resembled those that members in an organized crime structure would offer to guarantee their position in the hierarchy, Insightcrime said.

Some observers believe Perez Molina took advantage of historically weak political parties in order to found his own Patriotic Party in 2001 as a tool to eventually take control of the country for his personal gain.

The International Commission Against Impunity in Guatemala (CICIG) said that by 2008, well before it gained control, the party was already taking illegal contributions as down-payments for future favors, and creating vague receipts to cover their tracks, according to the Economist. Perez Molina was elected in 2011.

New President Jimmy Morales said in his January inauguration speech that he would not tolerate corruption or theft, saying that the reaction would be swift and severe against those who want to steal the people’s money.