Former Prime Minister Nikola Gruevski said he did not knock down a rival’s building as he testified in court Friday on charges of abuse of office during his time in office. 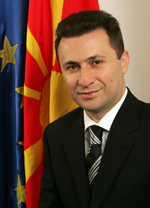 Nikola Gruevski (Photo: Vlada.mk)Gruevski has been accused of demolishing a building belonging to political opponent Fijat Canoski. Prosecutors say Gruevski conspired with the transport minister, the mayor of Gazi Baba, and a municipal inspector to arrange the demolition.

The charges arose from a wiretapping scandal revealed by another political foe, Socialist Democrat Zoran Zaev. Gruevski is accused of illegally wiretapping more than 20,000 Macedonian citizens.

On one of those recordings, a man alleged to be Gruevski can be heard discussing the demolition. Since the scandal broke, Gruevski has stepped down as prime minister, but continues to insist that he is innocent.

In his testimony at the Criminal Court in Skopje, Gruevski sought to blame Zaev.

“Elections are won with a commitment to a responsibility, with honest work, not absurd steps in manipulation with lies…lies, speculation or similar things, with which our and my political opponent [has been] engaged in the whole past period,” Gruevski said.

Gruevski said Zaev is manipulating the situation to distract from his own corruption.

Gruevski and Zaev have been locked in bitter conflict since Zaev released recordings that allegedly showed Gruevski had been wiretapping more than 20,000 Macedonian citizens. The recordings incriminated many members of Gruevski’s cabinet. Among the apparent crimes revealed was the alleged coverup of the death of a young man killed by a police officer.

“Citizens and people [have known] me [for] more than 10 years, and know my coworkers, and what is best and most important, they know Zaev very well,” Gruevski testified.

In April, President Gjorge Ivanov pardoned 56 politicians being investigated by the special prosecutor, including Gruevski. The pardons would have ended the work of the prosecutor, who had a mandate to investigate the allegations that stem from the wiretapping scandal only.

The special prosecutor refused to back down and continued the investigation; after massive protests Ivanov revoked the pardons.

According to Balkan Insight, in a recent survey by the International Republican Institute, those who rate Macedonia as “peaceful and stable,” dropped from 19 percent to 5 percent.