The US Department of Justice said Friday that Amin Yu pled guilty to acting as an illegal agent of a foreign government and conspiring to commit money laundering in a case where submarine technology was stolen and sent to a state-run Chinese university. 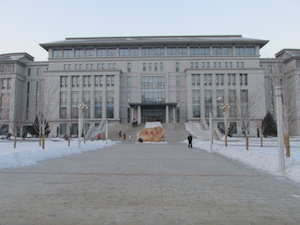 Harbin Engineering University (Photo Credit: Wikipedia)Authorities said that from at least 2002 until February 2014, Yu illegally exported systems and components for submarines from companies in the US. Working with co-conspirators employed at Harbin Engineering University (HEU) in China, the technology was used to help the co-conspirators build their own submarines.

HEU’s website says that it has become a “developer of high-level marine technology in China” and that its technology for underwater robots, ship stability and nuclear power simulation “holds a prominent place in the world.”

Since 2011, HEU students have participated in a competition to build their own submarines using commercially available technology, Defense News reported. A vehicle built by the team included cameras and was capable of firing torpedoes.

The Diplomat wrote that Chinese researchers tested a mini-submarine in 2014 that state media said could be upgraded into an underwater combat and patrol robot. The vehicle’s computer allowed it to make decisions underwater and conserve energy. Some worry that such vehicles could disrupt operations in the South China Sea, according to the Diplomat.

A sentencing hearing  is set for Aug. 29. Yu faces up to 10 years in prison for acting as an illegal agent of a foreign government, and up to 20 years for conspiring to commit money laundering.