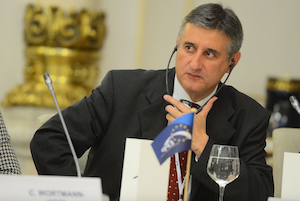 Tomislav Karamarko (Photo Credit:Wikimedia) The ongoing crisis was triggered when Karamarko was accused of corruption after his wife received a € 60,000 (US$ 68,000) fee from a lobbyist affiliated with the Hungarian mineral oil group MOL, Deutsche Welle wrote.

The MOL group has been at odds with the government of Croatia over management rights to the public oil company INA. Karamarko said he was friends with the lobbyist, said to be Josip Petrovic, and denied a conflict of interest.

An opposition party filed a no-confidence motion against Karamarko over the allegations, and Balkan Insight reported earlier in the week that the opposition was close to having the vote tally needed to see him removed.

The latest salvo from Karamarko builds on a press conference from last week, where Oreskovic called for Karamarko and Petrov to step down. He said that relations between all three of them had “become too great a burden for Croatia,” but said at the time he did not intend to resign.

Karamarko said that his party, the Croatian Democratic Union (HDZ), filed a motion of no confidence against Oreskovic on Tuesday. He said that his party thinks that the government is dysfunctional, and that it should be united if it wants to achieve its goals of reform, Balkan Insight reported.

The HDZ has said that Oreskovic has put his own political gain over economic priorities, Balkan Insight wrote. However, some are worried that a no-confidence vote could mean that the HDZ would have a tough time getting a new majority.

So far, a vote on the motion is expected to occur late next week, coming up on the days when the country celebrates two major milestones, the 25th anniversary of independence and it’s third year in the European Union.