The US Fish and Wildlife Service has announced a near total ban on the domestic commercial trade of African ivory by limiting imports, exports and sales across state lines. 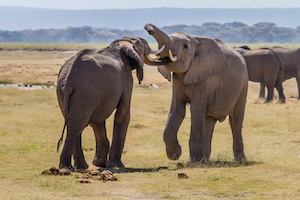 Elephants (Photo Credit: Wikipedia)  “The people of the United States will be speaking loudly,” and are saying that we value “living elephants in the world more that we value the creation and the trade of trinkets,” Fish and Wildlife Service director Daniel Ashe told the New York Times.

The rule is another step in a push by US authorities to crack down on illegal ivory, which has both dramatically affected elephant populations in Africa and has allegedly connected trafficking gangs with extremist groups. Currently, the US is the second destination after China for illegal ivory, and the new rule comes on the heels of an executive order by President Barack Obama in 2013 that funded African police forces and park rangers in their fight against well-armed poachers, the Guardian wrote.

The United Nations said in its recently released World Wildlife Crime Report that virtually every country plays a role in wildlife trafficking. Drawing off data developed by partners, they said that most illicit ivory is sold illegally, in contrast to products like wood and seafood, which are often sold legally after being acquired illegally.

According to Kenyan President Uhuru Kenyatta, poaching fuels corruption, undermines the rule of law and helps fund transnational crime, and he called for an end of the illegal ivory trade at a summit in April, BBC reported. However, some of Zimbabwe’s leaders say that they need to engage in an ivory trade to pay for protecting the country’s elephants.

One Zimbabwean leader said there is little evidence that trade bans have saved animals from extinction, and asked diplomats for support for their push to open up international trade at the next UN Convention on International Trade in Endangered Species in September. The government of Zimbabwe currently has an estimated US$ 35 million in ivory stored away, Reuters reported.

The new rule helps fulfill Obama’s executive order by prohibiting most commerce in ivory, but allows exceptions for things like musical instruments, guns and furniture with less than 200 grams of ivory and which meet other restrictions. Ashe said that the exceptions came from the concerns raised by various groups, and cover items that “are not drivers of elephant poaching and do not provide cover for traffickers.” Specifically, some musicians had trouble traveling with instruments that had some ivory because they could not get the proper permits.

The rule is limited to African elephant ivory, but the action closes a “major avenue to wildlife traffickers by removing the cover that legal ivory trade provides to the illegal trade,” according to Ashe. Before the new rule, ivory could be bought or sold if it was imported before the animal was listed as endangered, or died of natural causes, a purported loophole that some said gave cover to poachers, the Guardian wrote.

The Washington Post reported that the rule would also make an exception for antiques over 100 years old whose age could be verified. However, some dealers and collectors said that the rule would render potentially valuable artifacts worthless because proving age would be too hard.

The proposed rule attracted a lot of attention, due in part to the process under the Endangered Species Act that opened the change for public comment. The Fish and Wildlife Service said that the rule was the second most commented on in the history of the agency, according to the New York Times. Overall, over a million comments from the public were received since 2015.