Philippines: President-Elect Says That Journalists “Not Exempted From Assassination”

In a nation that has seen about 175 journalists killed since 1986, media groups denounced President-elect Rodrigo Duterte for suggesting that journalists were being killed because they were corrupt. 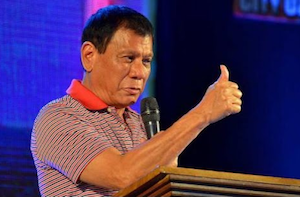 Duterte told reporters on Tuesday that “Most of you are clean, but do not ever say all journalists are clean.” He said that journalists would not be killed if they “don’t do anything wrong”, because most of those killed, “have done something.”

Speaking about constitutional provisions protecting freedom of expression, he said that “the constitution can no longer help you if you disrespect a person,” the Guardian wrote.

In order to crack down on crime, the President-elect has said that he would offer bounties to law enforcement who killed drug traffickers, send police special forces into the main jail in Manila with shoot-to-kill orders, and have corrupt top ranking police killed by less senior soldiers.

A warlord clan killed 32 journalists, along with other victims in 2009, in an effort to stop a rival’s election challenge, ranking as one of the worst attacks against journalists in the world.

The National Union of Journalists of The Philippines (NUJP) wrote on Tuesday that “nothing justifies the murder of journalists.” They said that Duterte’s comments essentially declare “open season to silence the media…on the mere perception of corruption”

According to the NUJP, “The independent Philippine media will not be cowed from fulfilling its duty to act as the people’s watchdog.”