The government of Interim President Michel Temer was rocked again after a minister was forced to resign over a secretly recorded conversation, the Guardian reported. 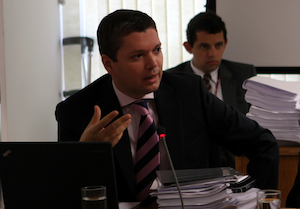 Fabiano Silveira (Photo Credit: Flickr) that recordings revealed on Sunday showed Minister of Transparency, Monitoring and Control Fabiano Silveira allegedly speaking with Senate President Renan Calheiros on how to avoid investigation by those looking into corruption at Petrobras, Globo and BBC wrote. In the conversation, which was recorded in February, Silveira criticized the work of the Attorney General’s Office and the conduct of the investigation.

Silveira also allegedly sought information about Calheiros from federal authorities relating to the investigation. Former senator Sergio Machado, who recorded a series of conversations with politicians as part of a plea deal, was also involved in the conversation with Silviera and Calheiros, BBC said.

Staff members at the Ministry of Transparency went to the presidential palace to call for the removal of Silveira and those with management duties resigned their positions to press their demands. According to a spokesperson for Silveira, the excerpts from the conversation were taken out of context, Reuters wrote.

In his resignation letter, Silveira wrote that the generic comments and simple opinion were amplified by the political climate, and that he was being targeted by “very unusual speculations.”

The Guardian said that the resignation comes after planning minister Romero Juca took indefinite leave after recorded phone calls showed a plot by him to impeach suspended president Dilma Rousseff. Temer is starting to face questions after witnesses have named him as a key figure in the appointment of top executives at Petrobras, while his cabinet so far includes several ministers accused of accepting bribes as part of the scandal.