Once a chief of staff for former president Luiz Inacio Lula da Silva (Lula), Jose Dirceu was sentenced to 23 years in prison as part of the corruption scandal surrounding the  oil company Petrobras, international media reported. 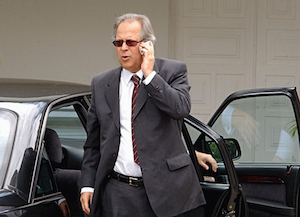 José Dirceu (Photo Credit: Wikipedia)Dirceu was convicted of corruption, money laundering and criminal organization, according to court sentencing documents. He was accused of receiving around R$ 15 million (US$ 4.2 million) in kickbacks, Globo wrote. His lawyers said that the punishment was excessive, as it amounts to a life sentence due to the fact that he is currently 70 years old.

Federal Judge Sergio Moro noted in his decision that Dirceu was involved in the scheme even after a previous conviction for running a vote-buying operation, adding that “not even a conviction by the country’s highest court could inhibit a criminal relapse,” according to the Guardian.

Dirceu’s Workers Party took a massive hit last week as the Brazilian Senate voted to suspend Brazilian President Dilma Rousseff, also of the Workers Party. She was accused of altering fiscal accounts to hide the size of the deficit, Bloomberg reported. So far, she is not accused of any wrongdoing in the Petrobras case, the Guardian said.

She will maintain some privileges such as a salary, personal staff and security as she stands trial in the Senate, but many expect that interim president Michel Temer’s new role will become permanent. However, speculation is that Temer will face a difficult time restoring confidence and reviving growth within the country in the face of enormous polarization and a fierce opposition, according to Bloomberg. He also potentially faces impeachment proceedings because he signed off on the same policies as the president.