Migrant Smugglers to EU Made Between $5 and $6 Billion Dollars in 2015, States New Report

According to the recent Europol-Interpol Report on Migrant Smuggling Networks, more than 90 percent of migrants entering the European Union (EU) are facilitated by third parties, predominantly by members of criminal groups, and the trend is expected to increase in the future due to “control measures taken by countries along the migratory routes.” 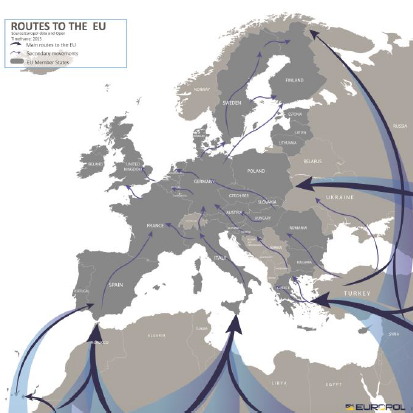 Migrant smuggling routes into the EU (Photo: Summary of Europol-Interpol Report on Migrant Smuggling Networks)A summary of the report, published by the International Criminal Police Organization (Interpol) and Europe's joint police force (Europol) jointly on Tuesday, reveals the latest estimated figures and defines the migrant smuggling routes amid what the United Nations High Commissioner for Refugees (UNHCR) calls “the biggest refugee and displacement crisis of our time”.

With members originating from more than 100 countries, human smuggling networks are loosely organized along key migratory routes, which are fluid themselves as they are influenced by border controls and other factors. The report highlights expectations that a further diversification of these routes is likely due to smugglers adapting the services they provide to meet the increased border measures taken by individual countries.

Such is the case of Hungary, which built a fence along its border with Serbia last year in order to reduce the number of migrants entering the country. The move was criticized by the UNHCR, which stated fears that the fence will "in fact serve only to push people into the hands of smugglers and traffickers".

The structure of the groups usually includes leaders who coordinate all activities along the route, local organizers who manage activities via personal connections and “opportunistic low level facilitators”.

The smuggling groups don't always work alone. According to the report, corruption among civil servants, law enforcement and customs officers is another key facilitating factor in the smuggling operations.

While the costs of running smuggling operations are low overall, the demand for these services remains high – especially since “Europe has seen an unprecedented increase in

the number of irregular migrants arriving” since 2014, and the trend is expected to continue.”

The Western Mediterranean route has been utilized by mainly Guinean, Algerian and Moroccan nationals for more than a decade. Migrants originating from African countries tend to utilize the Central Mediterranean route, departing for the EU from Libya via sea. The Eastern route is mainly taken by Afghan, Vietnamese and Syrian migrants. 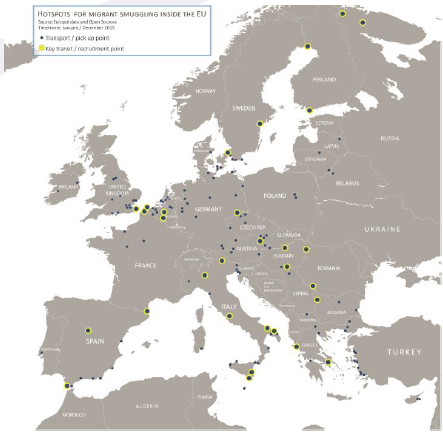 Hotspots for migrant smuggling inside the EU (Photo: Summary of Europol-Interpol Report on Migrant Smuggling Networks)

The South-Eastern route, however, has seen a massive increase of migrants using it - 1,612 percent since 2014. This is largely due to the conflict in Syria. A total of 885,386 entries via this route were recorded in 2015. The migrants using this route usually travel further along the Balkan route towards Northern European countries.

The use of fraudulent documents is generally a requirement for air transport, which is expected to increase due to stronger land and sea controls. In fact, criminal groups may simply rent out documents to migrants for a portion of their trip. Migrants may even swap documents several times throughout their trip, and the same documents might be used to facilitate different migrants.

Traveling by land is by far the most used method for migrant smuggling. The migrants are transported with cars, trucks or trains, and sometimes travel portions of their trip by foot. In August 2015, a migrant smuggling group was deemed responsible for the death of 71 migrants, including three children and a baby, whose bodies were found packed tightly and badly decomposed in a truck abandoned on the side of the road in Austria. 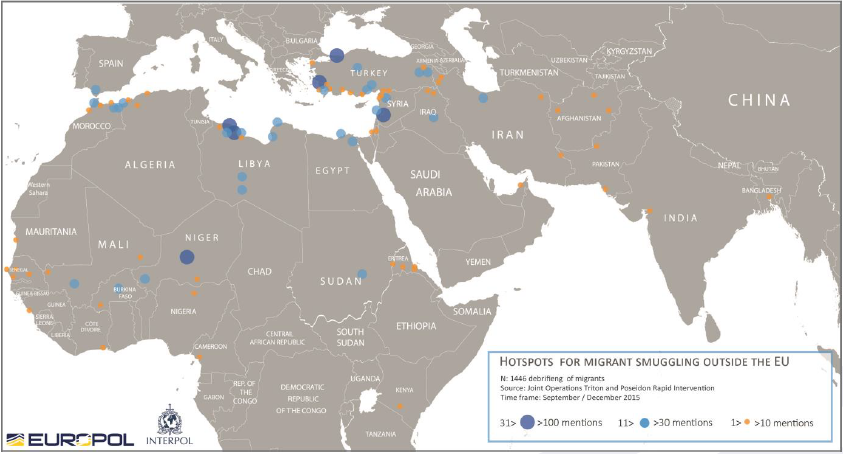 Hotspots for migrant smuggling outside of the EU (Photo: Summary of Europol-Interpol Report on Migrant Smuggling Networks) The most used transportation method via sea on short distances is the utilization of the rubber dinghy, usually 8 to 12 meters long and carrying between 30 and 40 migrants. The smugglers do not accompany the migrants on these trips, but simply give them instructions on how to steer the boats. The dangerous practice has been highlighted by the tragic case of Aylan Kurdi last September – when the image of the toddler’s lifeless body washed ashore became the symbol of the hardships refugees face when they embark on their trip. The death of Kurdi, as well as at least 11 others who drowned when their boat sank that day, was attributed to migrant smugglers.

The migrants themselves are vulnerable, and may be subject to sexual or labor exploitation, or used as drug mules for the organized crime groups either before or after they enter the EU. An increase of such cases is expected, as many migrants who are not able to cover the costs of their travels are targeted by the criminal groups.

According to Europol Director Rob Wainwright, the report “describes the huge role played by organized crime networks in the migration crisis and sends a clear message to the EU and its Member States that we must combat these networks in the strongest possible terms.”

In regards to the findings of the report, Interpol Secretary General Jurgen Stock said, “We are facing a new dimension in global security, one which can only be properly addressed through effective communication between all agencies around the world which are responsible for protecting their citizens.”