The leader of European football said he plans to resign after the Court of Arbitration for Sport (CAS) reduced his suspension from six years to four on Monday. He said that he would continue the fight to clear his name, ESPNFC wrote. 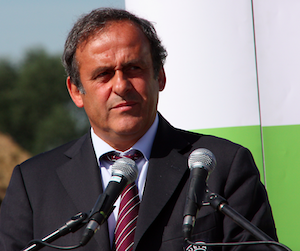 Michel Platini (Photo Credit: Wikipedia) Michel Platini, the president of the Union of European Football Associations (UEFA), along with Sepp Blatter, the president of world football’s governing body, FIFA, were banned in December from all football-related activity for eight years in a case that centered on a payment that totaled around US$ 2 million at the time. Both men went to the CAS in February after their bans were reduced to six years by a FIFA appeals panel, ESPNFC reported.

The duo said the money was part of a gentleman’s agreement, but FIFA decided that the payment violated ethics codes relating to conflict of interest, offering and accepting gifts, loyalty, and general conduct rules.

The CAS panel upheld the sanction, but reduced the ban to four years, saying that they were “not convinced of the legitimacy” of the agreement. They added that the payment was made four months before the 2011 FIFA election, the Guardian reported. The CAS said that the punishments from FIFA were too severe, but that Platini’s lack of repentance and an illegitimate pension arrangement accounted for the ban length. They criticized FIFA for the gap in time before they knew of the payment, ESPN FC said.

UEFA said on Monday after taking note of Platini’s statement that they would not name an interim president, but would meet on May 18th to “discuss next steps, including the scheduling of an elective congress.”