The European Central Bank (ECB) will discontinue printing the 500 Euro bank note due to it being widely used for illicit activities, following a Wednesday decision. 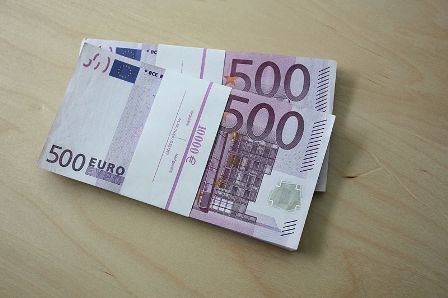 500 Euro banknotes (Photo: Wikimedia Commons)While existing 500 Euro banknotes remain legal and will retain their value, the Governing Council to the ECB has decided the banknote will not be issued as part of the new Europa banknote series, which is gradually being introduced since 2013.

Europe's joint police force, Europol, welcomed the decision a day later. In a Thursday press release,  Europol said that in the previous week alone, “Europol received information around a number of on-going cases where over EUR 10.4 million, almost exclusively in EUR 500 notes, have been seen to be used in criminal activities.”

According to Europol Director Rob Wainwright, the 500 Euro note accounts to more than 30% of the value of all banknotes in circulation, “yet most people have never seen one”.

“This raises questions about the the purpose for which they are being used and whether this could be linked to criminal activity,” said Wainwright.

The same day ECB to the decision, Portuguese authorities dismantled a major transnational criminal group which allegedly utilized the football sector and offshore tax havens to launder money. The several thousand Euros that police seized as part of the raid were mostly 500 Euro banknotes.

The future of the 500 Euro banknote has been a subject of discussion for some time.

In January, Reuters journalists interviewed the head of European Anti-Fraud Office, Giovanni Kessler, who reportedly also warned of the danger the high-valued note poses while in circulation.

"I wonder if there is still a need for high denomination bills, such as the 500 Euro bill, especially bearing in mind that these can make the life of fraudsters much easier," Reuters quoted Kessler.