A former state secretary of Romania’s Ministry of Finance has been found to have offshore companies through the Panama Papers, OCCRP partner RISE Project Romania (RISE) reported in a new investigation. 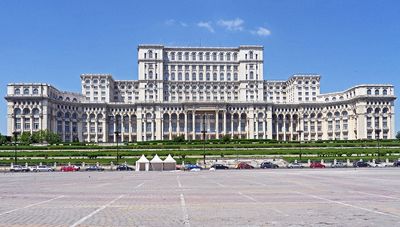 Palace of the Parliament - Bucharest, RomaniaIonut Costea, who was also a vice president of the European Bank for Reconstruction and Development and a former president of Exim bank, was known as the “most well-paid man in Romania” in 2011, according to reporters at RISE Romania.

Costea’s brother-in-law, Mircea Geoana, is the former leader of the Social Democratic Party and head of the Aspen Institute in Romania, a non-governmental organization dedicated to leadership, entrepreneurship and policy programs. Geoana is also a member of the Romanian Senate representing Dolj County and has had a long and distinguished career in Romanian politics, according to his biography on the Aspen Institute website.

When the Panama Papers were released, Geoana publicly expressed indignation over tax evaders: "It is abundantly clear that wealthy international corporations and billionaires, including Romanian billionaires, play by different rules than the ordinary man.”

“They have offshore companies and pay taxes more or less transparently,” he said, “while ordinary men have to pay them on time, otherwise they are charged with penalties.”

But it appears Geoana’s brother-in-law, Costea, and Romanian Victor Vanea, also a British citizen, were in offshore business together, according to findings in the Panama Papers reported by RISE Romania.

Vanea is the owner of a UK-based company called Pan-European Group. His company organizes events, such as seminars, business forums and international conferences and other events with the chambers of commerce of various countries.

Vanea and Costea, through middleman Max Blauenstein, established several companies through Mossack Fonseca, the law firm and offshore formation agents based in Panama. Blauenstein acted as an intermediary between Vanea and Mossack Fonseca.

Shilou Finance Corp. is divided equally between Vanea and Costea. This company is the sole shareholder of another company based in Quebec, Canada: Quebec Atlantic LP Consultant Group Inc., incorporated in April 2002 on their behalf by Blauenstein.

In regards to the companies in the BVI and Quebec, Costea told RISE Romania: "I did some consultancy at the time. I did this when I was no longer in politics, but in private business.”

Vanea had also established another company, Publishing Mapledene in the UK in 2005, owned by financial publications network eufinancemags.com. It was later dissolved in 2015.

Vanea’s media network received sponsorship from the Black Sea Trade and Development Bank, of which Costea was vice-governor between 1997 and 2000, according to a copy of his curriculum vitae. Costea has denied any kind of work with the bank.

The Panama Papers documents show Costea and Vanea’s company was involved in real estate. Costea had started his own real estate company in Romania in 2007 when he founded Golf Property Real Estate SRL, which would arrange for the purchase and sale of several apartments in the Silver Mountain complex, a € 400 million (US$ 456 million) investment resort belonging to businessman Dan Fischer.

Costea told RISE reporters that the offshore company he founded with Vanea was not intended for acquiring real estate, but was simply an extension of the business Vanea ran organizing conferences.

"I really don’t remember much of that time, 2003 or when it was [...] After that, I stopped doing this, because it wasn’t good business."

Costea told RISE reporters that he does not know anything about Vanea. Contacted by RISE, Vanea denied any involvement in companies in the BVI: "I do not think so,” he said. “Sorry, I do not know what information you have, but the information is false."