A decorated US military officer was sentenced on Friday to 78 months in prison for passing along classified information in a bribery case that has shaken the Navy, the Associated Press (AP) reported. 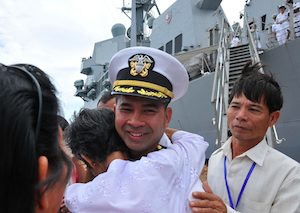 Reuters said that Commander Michael Vannak Khem Misiewicz was ordered to pay US$ 95,000 in restitution and a fine of US$ 100,000 in addition to the sentence. He pled guilty to a charge of conspiracy and one of bribery, the LA Times wrote.

US District Court Judge Janis L. Sammartino said that Misiewicz’s actions betrayed his country and shipmates. The Cambodian-born Misiewicz was adopted by an American woman amid the violence of the Khmer Rouge, and gained notoriety after returning to Cambodia as a Navy commander in 2010, AP said.

Misiewicz, who pled guilty in January, is the highest-ranking officer to be sentenced, Reuters said. Overall, the US$ 30 million scandal has seen 10 people charged, along with the censuring of three retired admirals.

According to prosecutors, Misiewicz passed along confidential details on ship schedules for the US 7th Fleet to the owner of a port servicing company called Glenn Defense Marine Asia, the LA Times said. In exchange, Misiewicz accepted gifts, travel, hotels and prostitutes for nearly two years from the company’s owner, Leonard Glenn Francis.

AP reported that Francis used the information to beat out competitors and overbill the Navy by more than US$ 34 million. He submitted fake tariffs and port fees, while both diverted Navy equipment to ports where costs could be inflated. Misiewicz also passed along classified information about Pacific ballistic missile defense operations, the LA Times said.

VOA reported that Francis agreed to forfeit US$ 35 million he made in the scheme, and is currently awaiting sentencing after pleading guilty to fraud and bribery charges.