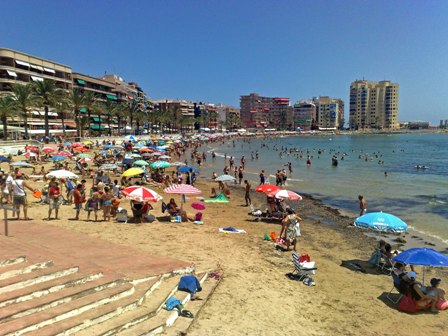 Torrevieja (Photo: Wikimedia Commons)The two rings were operating in the city of Torrevieja, in the south-eastern Alicante province, where police said they fully controlled the Nigerian prostitution business. The groups would hold regular meetings to agree on how much to charge customers and how to divide operational areas between themselves.

Police have arrested 30 members from the two groups and freed 18 women victims.

The investigations began more than a year ago after a Nigerian woman filed a complaint saying she was captured in Nigeria and sent to Spain where she was forced into prostitution to cover the travel expenses.

Inquiries led to another Nigerian woman, then to her associates also from Nigeria, who police in turn found were part of the wider network of the two prostitution rings.

Investigators tracked the groups’ money flows, amounting to more than one million Euros. The groups would send most of their profits back to Nigeria illegally, part for their accomplices and part to finance new trafficking operations and the search for new women to exploit. The networks also provided legal support for its members if arrested.

One of the two rings was led by five women. The group forced their victims into prostitution every night – from 7pm until early morning. The women could not return to the place they resided with their traffickers without the traffickers' permission.

Police said the women were subject to constant monitoring and various forms of humiliation and attacks.  One member of the group threatened to murder a victim in the presence of police officers during the member’s arrest, if the victim did not deny being exploited.

The second ring, led by two women and one man, was settled in the city of Ceuta, but operating in Torrevieja. That group used a local spiritual leader for influence, a pastor who police said hid evidence related to the prostitution operations in his church and significantly profited from them. The women were allegedly forced to pay the pastor for forgiveness for prostituting.

Even after the women returned to their residences, from working the streets for 12 hours per night, they were not permitted to rest. Traffickers forced them to continue working as caregivers for the elderly, cooking and cleaning for them. If the women disobeyed or did not bring in enough profits, they would be punished by being fed only bread and being subjected to voodoo rituals.

Police said the voodoo rituals involved women being forced to swallow dirty water with sand and to walk naked around the courtyards of the houses where they were held.  Victims were threatened with death if they reported their traffickers.

Commenting after a separate crackdown on a Chinese prostitution ring in Spain earlier this month, the Director of the European Union's joint police force (EUROPOL), Rob Wainwright, said, "Trafficking in human beings has for too long been perceived as a high-profit, low-risk activity. This perception has to change."