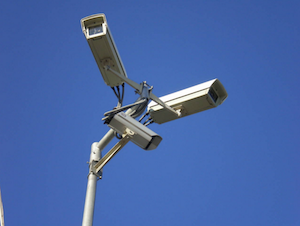 (Photo Credit: Wikipedia) The court said the restrictions in place to guard against unjustified interference in private lives were not a “sufficient and effective mechanism for external oversight of the system.” They also ruled existing regulations of metadata retention unconstitutional, civil.ge reported.

Two separate complaints were addressed by the April 14th decision. One was by the Public Defender’s Office and the other by a group of civil society organizations as part of the “This Affects You” campaign against illegal surveillance.

Surveillance by government authorities has a long history in the country. Journalist Zviad Koridze said most citizens understood it was a fact of life during Soviet times.

Ministry of Interior records show the Georgian government used hidden cameras, malware and other special equipment to make around 18,000 secret surveillance recordings over the past decade.  Its archives, dating back to the early 2000s, mostly contained recordings of political strategy sessions and conversations with journalists, politicians and civil society leaders, but also had a small amount depicting sexual activity which sparked calls for their immediate destruction.

Transparency International (TI) wrote in 2013 that Georgian authorities can directly access phone calls, text messages and internet use, without help from providers, via so called “black boxes” that are installed in the infrastructure of major telecom companies. TI Georgia noted the strong risk that direct access to communication data could be abused, citing a lack of accountability by government agencies and insufficient court oversight.

Parliament changed the law in 2014 to tighten controls on surveillance by law enforcement, civil.ge said, but security agencies still had permission to use black boxes.  Rights groups protested that law enforcement could easily get around guarantees on personal protection because the use of black boxes gave them unfettered monitoring power.

In a news release, the Constitutional Court said its decision did not rule out rescue services having access to information, such as a person’s location, “in exceptional circumstances specifically established by law.”  It said existing legislation must be amended and new legislation brought in by March 31, 2017.