On Monday morning, somebody threw hard objects and several eggs at the public office of President Gjorge Ivanov in Tetovo in northwest Macedonia, according to local Macedonian media. 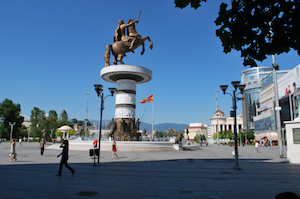 Skopje, Macedonia Ivanov's office in the capital Skopje met the same fate last Wednesday when, according to the BBC, protesters ransacked it, smashing windows and setting fire to furniture inside.

Meanwhile, European Commission spokeswoman Maja Kocijancic called on leaders of the country's main political parties to meet with European commissioner Johannes Hahn to try and negotiate a way out of the reignited political crisis in the country, Radio Free Europe/Radio Liberty said.

Macedonian citizens are angry about Ivanov's controversial April 12 decision to pardon all persons investigated as part of a wiretapping scandal which has shaken the country to its core.

Skopje’s streets over the past few days have mirrored scenes from May 5 of last year, when massive anti-government protests took place and the country plunged into a deep political crisis.

The alleged wiretapping scandal came to light at the beginning of 2015, when the leader of the opposition Social Democrats (SDSM), Zoran Zaev, started publishing a series of recordings, allegedly containing the voices of top government officials discussing a variety of crimes.

Zaev said the tapes grew out of an illegal order by former Prime Minister and leader of the VMRO-DPMNE, Nikola Gruevski, to wiretap more than 20,000 Macedonian citizens, including several members of his own cabinet.

As a result, months of general dissatisfaction among Macedonian citizens evolved into a series of full-blown anti-government protests in early May last year. Members of Zaev's SDSM, civil society organizations and citizens called for the resignation of a number of VMRO-DPMNE officials, but foremost for Gruevski to step down.

Gruevski maintained that the tapes were doctored, and created by the opposition in order to destabilize Macedonia and mount a coup with the help of an unnamed foreign intelligence agency.

Soon, supporters of Gruevski and the ruling VMRO-DPMNE organized a counter-protest. For weeks, the capital was the scene of two opposing groups setting up camps and refusing to back down for weeks.

The unrest finally calmed down in the summer months of 2015, when the main political parties negotiated an agreement with the help of European Union mediators.

The June-July 2015 Przino Agreement included: snap elections to take place this year, Gruevski’s resignation, the participation of SDSM representatives in ministries and the establishment of an independent Special Prosecutor's office, exclusively tasked with investigating alleged wrongdoing connected with or contained in Zaev's tapes.

Even before the appointment of Katica Janeva as Special Prosecutor, the proposed investigations into the wiretapping scandal faced difficulties.

Early in September 2015, a court in Skopje ruled the tapes could not be used as evidence, on the grounds they were obtained illegally. The opposition accused the VMRO-DPMNE of influencing the court and trying to avoid the appointment of the special prosecutor.

Later that month, the formerly little-known Janeva was appointed.

Since putting together her team of 12 deputies, the Special Prosecutor's office has initiated criminal proceedings against a number of politicians.

It has also been on the receiving end of heavy criticism, especially by the VMRO-DPMNE which accused Janeva of being an "instrument" of Zoran Zaev.

The office was hit with criminal charges, alleging that deputy special prosecutors had been coercing police employees to testify with promises of lighter sentences.

Janeva and her deputies denied these allegations.

In November 2015, Janeva and her team announced their first investigation.  They would look into allegations that Saso Mijalkov, former secret services chief and Gruevski's cousin, had taken a bribe to smooth the procurement of surveillance equipment from an Israeli company.

Soon after, the Special Prosecutor’s office started investigating allegations that a number of government officials, including ex-Interior Minister Gordana Jankulovska, ex-Transport and Communications Minister Mile Janakieski and General Secretary of the Government Kiril Bozinovski, were involved in vote-rigging during the 2013 local elections, and accusations against Mijalkov, who allegedly ordered police officers to mistreat a political opponent of the VMRO-DPMNE during his arrest in 2011.

On April 12, however, President Ivanov proclaimed his decision to pardon all those involved in the wiretapping scandal. According to Reuters, this meant 56 government and opposition figures, accused of a variety of crimes, were pardoned by Ivanov.

Ivanov had decided to use his constitutional powers of pardon not a month after a controversial decision by the Constitutional Court had restored them, sparking a wave of protests.

On March 16, the Constitutional Court restored the president's right to pardon people convicted of electoral crimes, pedophilia, drug production and trafficking, and crimes against humanity. Parliament hadremoved these powers in January 2009.

About a month before the Court’s decision, the Special Prosecutor's Office had announced its accusations under its election fraud probe.

Ivanov's Tuesday decision, effectively ending the work of Janeva's office, was widely criticized by international actors, including the US Department of State.

Zaev called for mass protests, and for Ivanov to resign immediately, accusing him of protecting criminals.

The Associated Press reported that thousands of anti-government protesters took to the streets in the following days demanding Ivanov's resignation.

Local NovaTV journalists estimate that between 10,000 and 18,000 protesters have turned out daily since the president’s decision. Some protesters reportedly painted statues constructed under the controversial “Skopje 2014” project.  The project aimed at giving the capital a more classical look and included the construction of numerous sculptures of historical Macedonian figures. While some see the project as one of Macedonia's greatest national achievements, many see it as a notorious example of government-backed corruption in the country.

Counter-protests also took place only a few blocks away, separated from the anti-government protesters by a police cordon due to the danger the groups might clash.

NovaTV journalists say the VMRO-DPMNE bussed people from all over Macedonia into the capital to take part in the counter-protests throughout last week.

According to Balkan Insight, Parliamentary Speaker Trajko Veljanoski signed papers on Friday for snap elections, which are part of the Przino agreement, to take place on June 5.  This was despite the SDSM announcing its refusal to take part as matters currently stand. The SDSM believes that key reforms regarding media freedom and measures to avoid pressuring of voters have not been sufficiently met for fair elections to take place.

The elections are, according to Ivanov himself, the main reason he pardoned all those implied in the wiretapping scandal.

With an abundance of calls for the reversal of his decision, Ivanov defended his standpoint saying the decision is in Macedonia's best interest. He said he made his decision to help "overcome the political crisis and ease tensions between political opponents" ahead of the elections.

Both Zaev and Gruevski publically rejected the amnesties. In an interview with local TV station Kanal 5, however, Gruevski said he recognizes Ivanov's motives were patriotic and for the sake of the country.

Despite Ivanov's decision, the Special Prosecutor's office has announced a new investigation – suspecting, among others, the mayor of Bitola, a VMRO-DPMNE member, of abuse of power, according to NovaTV.

Janeva's office disputes the president's right to give amnesty to those implicated in the scandal.

"We are here and we are working.... I believe justice will prevail," Balkan Insight quoted Janeva as saying. She reportedly added that the president "will have a lot of work" in front of him if he continues pardoning more officials suspected of committing grave crimes.