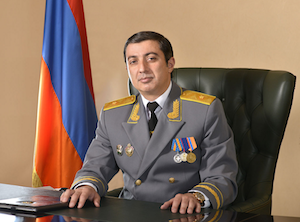 Details of the offshore transactions linked to Poghosyan and two of his relatives were found in the Panama Papers, a mass of internal data from Panamanian law firm Mossack Fonseca. The data was obtained by German newspaper Süddeutsche Zeitung and shared by the International Consortium of Investigative Journalists (ICIJ) with OCCRP and media partners around the world, including Hetq.am.

The Panama Papers indicated Poghosyan had shares in three companies: Sigtem Real Estates Inc. (Sigtem), Hopkinten Trading Inc. (Hopkinten) and Bangio Invest S.A. Hetq.am said. He allegedly held his stock in bearer shares, where the issuing firm would not register stock ownership or track ownership transfers but where the shareholder could still enforce their rights.

Sigtem and Hopkinten were equal owners of Armenian company, Best Reality Ltd., which had been used to carry out appraisals of property in CES cases, according to Hetq.am.

When Hetq.am asked about the CES head’s ownership of shares in offshore companies, the CES replied that Poghosyan “has no affiliation with the companies cited in your inquiry.” Poghosyan told newspaper Haykakan Zhamanak he had owned profitable businesses before working for the government, but did not have any businesses as a government official, other than some leased property.

Poghosyan has been head of the CES since 2008. Despite his claims that he did not own any businesses, he filed four court suits between 2013 and 2014 to reclaim loan money, Hetq.am said, including a demand for US$ 5.147 million from one citizen.

In a CES statement issued on his behalf today, reported by Hetq.am, Poghosyan said he was sad to see his name mentioned alongside the family of Azerbaijani President Ilham Aliyev: “I find it unacceptable that I might be the reason for any possible civilized parallel to be drawn between my country and dictatorial Azerbaijan. Thus, I have tendered my resignation.”

He said he would “publically respond to the offshore reports as a civilian, with no state levers at [his] disposal.”