Bosnia and Herzegovina State Police (SIPA) have detained 10 people for questioning, suspected of being part of an organized crime group which fleeced Bobar Bank of around 123 million Bosnian Marks (US$ 71.5 million). The fraud has shaken the country's banking sector, prosecutors said. 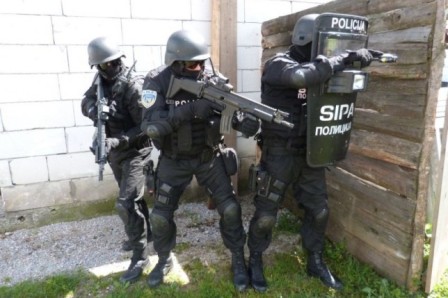 SIPA officers (Photo: sipa.gov.ba, unrelated to article)The police operation started early Thursday in the territories of Banja Luka, Bjeljina and Zvornik after several months of investigation into alleged illegal activities at the bank.

Prosecutors suspect the 10 of abuse of office and authority, money laundering and falsifying official documents. The suspects were allegedly involved in approving illegal loans, worth millions of dollars, and illegal bank guarantees to different companies owned by people either connected to or co-owning the bank.

Prosecutors say the suspects knew the loans would not be repaid or the guarantees honored, and that the bank's losses caused it to go into liquidation. The bank lost its operating license in December 2014.

Prosecutors say the illegal activities significantly damaged the country's credit rating and led to the International Monetary Fund becoming "actively involved in the analysis of developments in the banking sector."

The illegal banking activities also endangered other parties' deposits at the bank – including city and municipality funds, healthcare institutions and pension funds.

The 10 suspects were taken to the State Police center for the investigation and a decision on their status by state prosecutors is expected soon. Authorities say the ongoing investigation also involves other suspects not yet detained.