A crackdown on a mob-style network in Italy’s capital city of Rome saw its former mayor in court Wednesday on trial for corruption and illegal financing, Agence France-Presse (AFP) said. 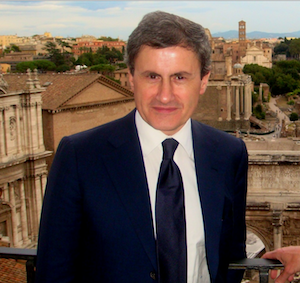 Gianni Alemanno (Photo Credit: Wikipedia) Gianni Alemanno, mayor from 2008 to 2013, is suspected of illegally pocketing an estimated € 125,000 (US$ 140,000) to fund political activities. He is also accused of appointing friends to city jobs, AFP said.

The case is part of the Mafia Capitale scandal in which 46 people are accused of participating in a crime group that skimmed off millions of euros meant for public services for their own benefit.

The Local said the scandal represented the biggest anti-corruption operation seen in Italy since the early 1990s. The scale of the accusations shocked many when news of the investigation broke, Reuters reported.

Italian authorities have around 36,000 hours of wiretaps, along with secret videos recording some of the accused receiving bribes, Reuters reported from local media.  A former member of the Rome city council was sentenced to prison in January for his involvement in the scheme, Repubblica said.

The crime ring was allegedly run by gangster Massimo Carminati and his sidekick, Salvatore Buzzi. Police said the group operated like a mob clan but was independent of established organized crime groups like the Cosa Nostra or the ‘Ndrangheta, Reuters said.

Investigative Reporting Project Italy (IRPI), an OCCRP partner, reported that the alleged scheme controlled a wide range of tenders, ranging from beach cleaning to managing camps for Roma and services provided by the national health system.  It said the group seemed most adept at diverting cash allocated for the care of refugees and migrants.

Alemanno said: “I will prove my innocence, although many have already written me off as guilty,” according to the AFP. The hearing was adjourned until Friday, AFP said.