Delyan Peevski, the subject of several corruption investigations by OCCRP partner Bivol.bg, has said he is withdrawing from future business projects in Bulgaria citing a "continuous media campaign" against him. 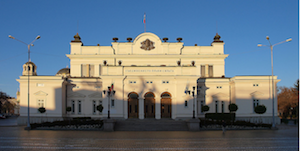 Bulgaria National Assembly (Photo Credit: Wikipedia) The MP, media owner and former head of the Bulgarian national security agency DANS has been described by Der Spiegel as "the iceberg of corruption in Bulgaria”.

Bivol, which has looked extensively at the privatization of the country's tobacco holdings, has pointed out a succession of complex and opaque deals that have resulted in very senior politicians, including Peevski and his associates, benefiting.

The Bulgartabac factory in Sofia closed its doors to workers for a few days last week and will close for good on 1 April, according to Bivol’s sources. They say some of the equipment from the factory will be moved to Bulgartabac’s “Duvana” factory in Banja Luka, in the Bosnian entity of Republika Srpska.

Peevski's own share of the company is also being sold off, although his mother Irena Krasteva remains the likely majority owner, according to Bivol. Peevski’s ownership is being sold to a Dubai company which Bivol says may also be connected to the businessman.

While Peevski complains of a supposed smear campaign, his own alleged attempts to limit reporting made by Bivol and other Bulgarian media are well known.

A few weeks later, a Bivol reporter's home was broken into, and other journalists threatened. At the same time, several Bulgarian media outlets - all of which were linked to Peevski - launched a vicious wave of attacks on the investigative website.

Peevski's decision to withdraw from future business projects is only the latest in a series of damaging developments as he fights to maintain his influence. According to Balkan Insight, Bulgarian Prime Minister Boyko Borissov said Monday that as long as Peevski remains part of the Turkish minority party, Movement for Rights and Freedoms, it cannot participate in a coalition government with the Prime Minister’s party.