Balkan Arms Continue to Make Their Way to Syria

Military analysts have again identified Balkan-made arms in the hands of Syrian rebel groups, OCCRP’s partner center BIRN reported. The weapons appear to originate from both Serbia and Bulgaria. 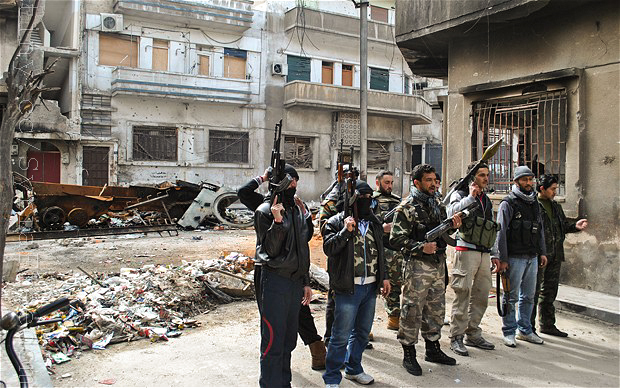 A Feb. 26 YouTube video seems to show Syrian fighters from a group known as Division 13 operating a Serbian M69A 82 mm mortar north of Aleppo, ARES said. This weapon was designed by the Military Technical Institute in Belgrade.

The high explosive mortar projectiles, M62P8 120mm, were identified from a Feb. 12 YouTube video, and the heavy machine gun, an M02 Coyote 12.7 x 108mm, from a Feb. 16 Facebook picture. Both were posted by Syrian rebel fighters, ARES said. These two weapons had not been identified in Syria until recently, it said.

Cyrillic inscriptions visible on the projectiles and their packaging indicated the weapons were manufactured by Slavko Rodic Bugojno in former Yugoslavia, now Bosnia and Herzegovina. The same design is still produced by the Krusik Corporation of Serbia, ARES said. The Coyote heavy machine gun, a copy of the Soviet NSV, is produced by Zastava Arms in Kragujevac, Serbia, they said.

The analysts also examined video footage posted on Feb. 21 by the Abkhazia Network News Agency (ANNA News) and Frontinfo showing a fired cartridge case from a 40 × 46SR mm high explosive fragmentation (HE-FRAG) round produced in Bulgaria. This appeared to be filmed near Latakia Governorate in Syria, ARES said.

“What is particularly interesting about the cartridge case is that it indicates that the round in question was produced in 2014,” said ARES on its blog called The Hoplite, “The presence of this cartridge case in Syria is clear evidence of the recent supply of ammunition during the ongoing fighting in Syria.”

Late last year, Amnesty International published a report identifying Balkan-made arms in Iraq and Syria. The report, together with findings that last year’s terrorist attacks in France involved weapons from the Balkans, kicked off several initiatives to crack down on arms smuggling in the region.

BIRN said its reporters contacted Zastava Arms, the Krusik Corporation and the Military Technical Institute in Belgrade for details about the origin of the arms and how they were sold, but received no responses prior to their report.