Switzerland and Nigeria have agreed to work towards return of assets worth US$ 321 million stolen from Nigeria by its former dictator Sani Abacha, a Swiss Federal Council news release said Tuesday. 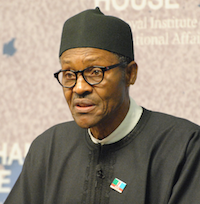 Muhammadu Buhari  Abacha ruled Nigeria for five years after a 1993 coup. He is believed to have stashed billions of stolen dollars in European bank accounts, according to the Guardian. After Abacha’s death in 1998, Nigeria asked Switzerland for help in recovering an estimated US$ 2.2 billion hidden in Europe, the Guardian said.

Liechtenstein has returned hundreds of millions of dollars recovered from the Abacha family, according to the BBC. Stashes in several other European jurisdictions are also being pursued.

Abacha was accused of numerous human rights abuses, with the 1995 hanging of several dissidents, including activist and writer Ken Saro-Wiwa, sparking a worldwide outcry, the Guardian writes.

A plan to return the recovered funds will now be developed to “guarantee that returned assets will be used in the interest of the people [of Nigeria],” said Prof. Yemi Osinbajo, Nigerian Vice President, in a news release from the Federal Republic of Nigeria.

Nigerian President Muhammadu Buhari has vowed to combat corruption.  He has asked both Britain and the United States for help in recovering money stolen by various Nigerian elites. An economic crisis in Nigeria triggered by low oil prices has made recouping the stolen money paramount, Reuters reports.

Africa loses upwards of US$ 50 billion each year in illicit financial outflows, the African Union Commission/United Nations Economic Commission for Africa (AUC/ECA) noted in a report.