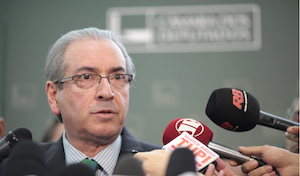 Eduardo Cunha (Photo Credit: Flickr) Ten of the court’s 11 justices voted; the 11th was out of the country, the AP said.

Brazilian law requires that all charges against federal congressmen and top government officials be filed and judged by the Supreme Court. Cunha allegedly accepted at least US$ 5 million in bribes between 2006 and 2012 in connection with construction of two Petrobras drilling ships, according to the Guardian.

Petrobras, Brazil’s state-owned oil company, is in the middle of a massive corruption scandal. Prosecutors allege that billions were paid in bribes for contracts with the company, with some money supposedly making its way to several political parties, the Washington Post said.

Thursday’s decision is the first time the Supreme Court has authorized charges in connection with the Petrobras investigation, said AP. So far, 50 sitting politicians have been investigated and a string of business and political figures have been toppled, according to the Wall Street Journal.

Cunha has so far evaded efforts to remove him from office, the Wall Street Journal noted. The Supreme Court has not yet decided if Cunha can continue to serve as head of the Lower House and finish his term representing the Rio de Janeiro state, according to the Guardian. Rodrigo Janot, the Attorney General, has petitioned the Court to remove Cunha from the Chamber of Deputies, the Wall Street Journal said.

The Chamber of Deputies (Lower House) Ethics Committee also approved an investigation this week into whether Cunha should lose his post for lying in a congressional hearing, according to the Washington Post.

Brazilian President Dilma Rousseff has also been hit hard by the Petrobras scandal. She is already facing impeachment proceedings for allegedly using funds from public banks to cover budget gaps, said The New York Times. A recent report in the magazine Isto É raises questions about her insistence that she knew nothing about the bribes and kickbacks at Petrobras, the same paper said.

Thursday’s decision by the Supreme Court could undermine impeachment efforts against Rousseff, noted the Guardian. Cunha is known as a sworn enemy of Rousseff and authorized the opening of impeachment procedures against her last year, the Guardian said.