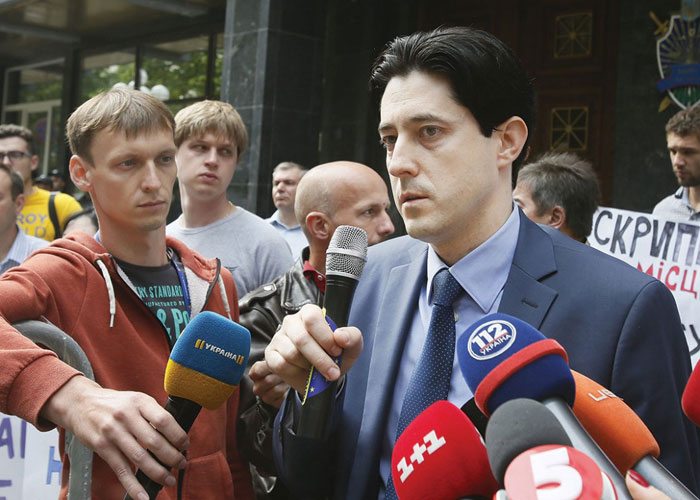 Vitaly KaskoKasko said he quit in part because Prosecutor General Viktor Shokin has blocked proceedings in cases initiated by Kasko’s team, he told a news conference in Kyiv.

One of those cases involves two high-ranking prosecutors – Oleksandr Korniyets and Volodymyr Shapakin – suspected of taking a 3.15 million hryvnia (US$ 117,000) bribe. Prosecutors say they recovered an unspecified number of diamonds after an unprecedented raid on the suspects’ offices and homes.

The July 5 operation was coordinated by Georgian Deputy Prosecutor General Davit Sakvarelidze. The suspects were both released on bail.

Public uproar followed when Shokin and his former deputies, Volodymyr Huzyr and Yury Stolyarchuk, allegedly tried to cover up for Korniyets and Shapakin. Mustafa Nayyem and Serhiy Leshchenko, lawmakers from the Petro Poroshenko bloc, said that the three top prosecutors had been pressuring Sakvarelidze and Kasko to drop the corruption cases, which Shokin denies.

Kasko, who was appointed deputy prosecutor general in May 2014, says corruption is widespread within the prosecutor's office and attempts at reform are blocked. “The General Prosecutor’s Office has become a dead institution, the independence of which nobody believes in,” Kasko said.

The office dismissed Kasko’s resignation as a public relations move.

“We’ll analyze Kasko’s report on what he had achieved and what he hadn’t done while he was deputy prosecutor general,” Vladyslav Kutsenko, an aide to Shokin, told Ukrainian 112 TV. Ultimately, he said, “society will evaluate his work.”

Kasko said he had discussed the situation with Western partners before quitting and that his decision had been supported.

Geoffrey Pyatt, the US Ambassador to Ukraine, wrote on his official Twitter page that Kasko was a champion for change within the Prosecutor General's Office.

“His resignation is a blow to Ukraine's reform progress,” Pyatt wrote.

Kasko said he would continue his work as a lawyer.